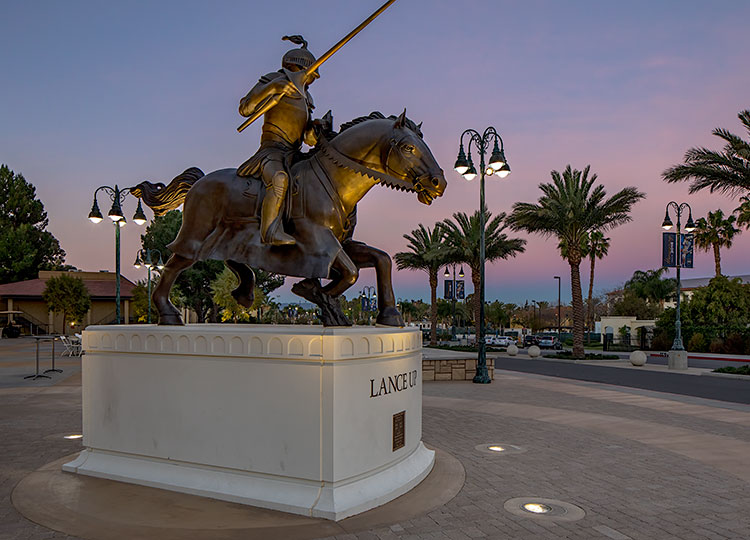 Campus Christmas Party is the campus community’s recognition of the onset of the Christmas season. This event features the Lighting of the Christmas Tree on the University’s front lawn. This annual event is scheduled after Thanksgiving and is sponsored by ASCBU.

Candle Lighting has historically been an event planned by couples who wish to announce a marriage engagement to the campus community. The bride-to-be secretly invites her friends to join her around the Fortuna Fountain for the announcement of her engagement. A candle is passed around the circle; when it reaches the bride-to-be, she blows it out. Prayer, music, and a short devotional are commonly part of Candle Lighting ceremonies.

CBU Crazies is comprised of CBU Students committed to supporting Lancer athletics events. In addition to wearing matching t-shirts that display the Crazies logo on game days, members support teams by attending athletic competitions and participating in cheers and chants.

Hooding Ceremonies. Graduate Student commencement regalia includes a hood with a lining that reflects the official school colors of California Baptist University, blue and gold. In addition, the field of learning in which the Student’s degree is awarded is shown by the color of the edging of the hood. Hooding Ceremonies are sponsored by Schools and Colleges prior to Commencement Exercises.

Fortuna Bowl is the men’s and women’s intramural sports flag football championships. Typically, both evening games are played during each fall semester on a lighted field.

Homecoming at California Baptist University features class reunions, a variety of alumni-related events, and the introduction of a Homecoming Court, which consists of Mr. CBU, Ms. CBU, and Class Princes and Princesses. At times, a theme (e.g. specific era, historical event, etc.) is selected for Homecoming decor.

Mr. and Ms. CBU. Two (2) graduating seniors (one [1] male and one [1] female) receive the Associated Student Body’s highest honors and are recognized as Mr. and Ms. CBU. In order to be considered for nomination, Students must fulfill the following criteria:

Mr. and Ms. CBU Selection Process. Each member of the Senior Class nominates (by casting ballots) a maximum of three (3) classmates for the honor of becoming Mr. and Ms. CBU. The top ten (10) nominees, five (5) males and five (5) females, are named as members of the Mr. and Ms. CBU Court. Prior to Homecoming, all members of the ASCBU (regardless of classification) cast ballots to determine the actual Mr. and Ms. CBU. Students are eligible for the honor of Mr. CBU or Ms. CBU only during, and prior to the completion of, their initial senior year. In the event of a tie, the candidate with the highest cumulative grade point average (GPA) will be selected. In the event of identical GPAs, the candidate with the greatest number of units completed will be selected.

In order to participate in Homecoming events, individuals selected as Homecoming Royalty (Mr. and Ms. CBU, Prince, and Princess candidates) must also agree to and abide by attire guidelines set forth by the Community Life Office. Candidates are provided written attire guidelines. In the event of a tie, the nominee with the highest cumulative grade point average (GPA) will be selected. In the event of identical GPAs, the candidate with the greatest number of competed units completed will be selected.

Kugel Walk. The Kugel is a floating granite globe sculpture located in the Ronald L. and Jane Dowden Ellis Great Commission Plaza at the main entrance to the Eugene and Billie Yeager Center. It is a symbol of Christ’s Great Commission. The name of the globe comes from the German word, “kugel” (pronounced KOO-gol), and means “ball.”

During New Student Orientation, Traditional Students touch the Kugel as part of a Kugel Walk that signifies the beginning of their educational experience at CBU and their official recognition as Lancers.

The Kugel plays a similar role for participants in other CBU activities such as International Service Projects. Most importantly, the tradition symbolizes each Student’s commitment to live a life of purpose in accordance with his or her spiritual beliefs.

Late-Night Breakfast is a scheduled diversion for Students from class finals each fall and spring semester. Faculty and staff serve as wait staff, students enjoy a late-night breakfast served in the Alumni Dining Commons.

Midnight Madness is an event that introduces the varsity men’s and women’s basketball teams to the campus community. This event typically occurs during the week prior to the first regularly-scheduled home games for the basketball teams.

Preview Days provide an opportunity for prospective students to visit campus. In addition to meeting faculty, staff, and current Students, visitors may audition for music groups, try out for Intercollegiate athletic teams, and attend special events.

Recess provides members of ASCBU with a diversion from homework. This event, which is held during the spring semester, includes food, games, and friendly competition between the classes.

Senior Class Gifts are presented as an expression of gratitude to the University by the graduating class during Commencement. Past gifts include:

Classes are encouraged to begin saving class funds and planning for Senior Class Gifts during the freshman, sophomore, and junior years. The Senior Class Gift selection process begins during the junior year of the respective class. Class officers obtain from the Student Service Office a list of class gift ideas and schedule a class meeting. During a class meeting members of the class review, discuss, and adopt a gift from the list. The class officers then notify the Student Services Office in writing of the adopted gift, no later than the conclusion of the academic year during which the class members are juniors.

Senior Days provides an opportunity for graduating high school seniors to visit California Baptist University. In addition to featuring a reception hosted by Faculty and staff, students may audition for music performance groups, try out for intercollegiate athletic teams, and attend special events. This event is held during the fall semester. Staff Member of the Year. Each spring, Students honor a full-time CBU staff member for exemplary service, dedication, and contribution to Student life. Each Student nominates (by casting a ballot) a maximum of three (3) full-time staff members for the honor of being named Staff Member of the Year. The top ten (10) nominees are then placed on a single ballot and Students are provided with an opportunity to vote for one (1) nominee. The Staff Member of the Year selection process is conducted simultaneously with the ASCBU Executive Council elections. Staff members are eligible to receive this honor once during any five (5) year (academic year) period. In the event of a tie, the staff member with the greatest number of years of service to the University will be selected.

TWIRP Week. During TWIRP (The Woman Is Required to Pay) Week, female Students are encouraged to invite male students to special activities and events. The week features square dancing lessons and a barn dance, trips to amusement parks, concerts, and themed dinners. This event is held during the beginning of each fall semester.

Yule Festival provides an opportunity for the student body to celebrate the Christmas season. This formal event features dinner and live entertainment.