"We know that transformation can happen when the right support, right encouragement, right love and right resources are given," Damien O'Farrell ('00) told a California Baptist University audience on Feb 16.


Wallace Theatre brings "Peter and the Starcatcher" to CBU

A theatrical story telling the origins of Peter Pan is coming to Wallace Theatre with "Peter and the Starcatcher." 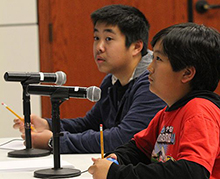