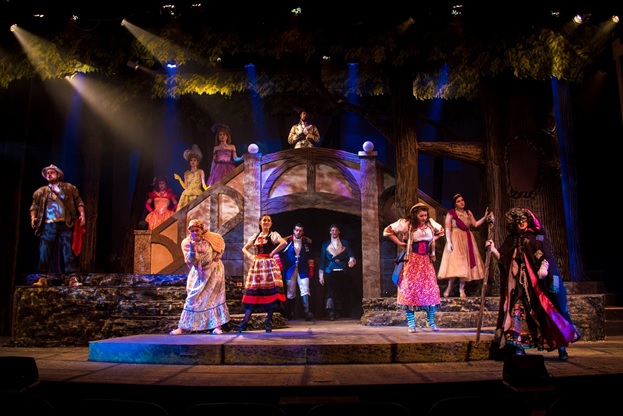 Riverside, Calif. (June 23, 2019) – The stage has gone dark as the theatre program at California Baptist University concluded its fourth annual Courtyard Shakespeare Festival on June 22. The summer production of “Hamlet” and “Rosencrantz and Guildenstern are Dead” finished the 2018-19 theatre schedule that featured four additional productions (“Lost in Yonkers,” “She Loves Me,” “Pride and Prejudice” and “Barnum.”).

Frank Mihelich, associate professor of theatre, said he is excited about the growth and direction of the theatre program at CBU.  Mihelich noted that four 2019 theatre graduates were accepted into graduate schools.

“For me, grad school is a sign that we’re doing something right,” Mihelich said. “Let’s get [our students] in front of people because the talent is big at CBU.”

Mihelich said that each year the department aims to improve on previous year’s production quality.

Theatre students work hard on their craft but are also required to work backstage, said Lee Lyons, professor of theatre. Sometimes the students discover they are better at lighting design or makeup than acting, he noted.

“You’re as important as the actor because in that moment, you’re trained to do something and nobody can just step in and do it,” said Lyons of the backstage crew. “Our goal is teaching students, taking their raw material and hopefully seeing real growth.”

Nicole “Koli” Marks, a theatre senior, was the assistant designer for hair and makeup for “Pride and Prejudice.” She was tasked with researching fashion styles of the early 19th century.

Putting on a play is a team effort, Marks said.

“As a performer, you can’t get up on stage unless you have an awesome backstage team,” Marks said.

While the students are at CBU, they are treated as professionals, Mihelich said.

“The American theatre is a tough place to work and make a career,” Mihelich said. “If they are trained to work in the professional American theatre, they will be prepared for whatever the Lord might call them into, be that teaching, drama-therapy, applied theatre or any other number of theatrical endeavors.”

Ryan Lee, a communication studies junior, played the leading role in “Barnum.” From remembering all his lines to doing magic tricks and costume changes, Lee had to work on enhancing his multitasking performance skills.

“Our show is so unique in the fact that it is not just like any other musical. It’s a musical circus,” Lee said.

In April, the theater program at CBU received 27 awards from the Inland Theatre League for its Shakespeare and main stage performances in 2018. The awards came in the categories of acting, set design, costume design, lighting design, musical director and director.

“We’ve got a creative band of people that is allowing us to do high quality work for college theatre,” Lyons said.

Mihelich said adding the Shakespeare Festival has helped grow the students and the reach of the theatre program.

“Shakespeare is the heavy lifting of acting training. If you master Shakespeare, all the other stuff is easier,” Mihelich said. “We have students who through class or the main stage or through the Shakespeare Festival are grappling with the classics more. The classics is like the Miracle-Gro for actors.”

The festival also brings in actors from the community and occasionally professional actors, exposing students to a new level of acting, Lyons said.

“That allows us to bring our acting quality up a bit more and to cast people who bring 30 years of experience as actors in the community.” Lyons said. “For the students, it’s a Shakespeare company where you come in with these small roles and begin to find your way up as the years go by.”