Riverside, Calif. (Aug 26, 2015) -- California Baptist University continues to increase its dining options with the addition of WOK ON, a Pan-Asian inspired cuisine, that will be featured this fall at Brisco's Café.

"We want to give our students a diversity of food choices and WOK ON will fill a missing piece and provide a new cuisine option to our campus community," said Kent Dacus, CBU vice president for enrollment and student affairs. 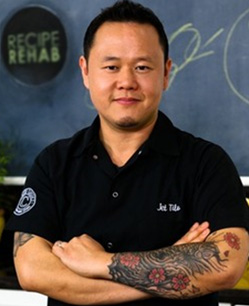 WOK ON is the brainchild of Food Network's celebrity chef Jet Tila. He has partnered with CBU and Provider Contract Food Service to create the Pan-Asian concept.

The new dining concept is scheduled to open on Aug. 31, with a grand opening celebration scheduled on Sept. 8 featuring an appearance from Tila.

Dining options will include a modern twist to Thai, Cantonese and Chinese wok-style or stir-fried cooking. Late-night items will include Asian fusion entrees such as Asian Tacos or Japanese and Latin "Dawgs" (hotdogs).

Kipp Dougherty, director of Provider Contract Food Service, said she is excited about the new addition to CBU's campus dining. "Get your chopsticks ready to dive into some great Asian-inspired cuisine," she exclaimed.

Brisco's is located on the northeast side of campus in the Village at CBU. In addition to WOK ON, Brisco's Café is open for lunch and dinner with cooked-to-order items such as subs, wraps and burgers as well as a selection of "Grab and Go" options.