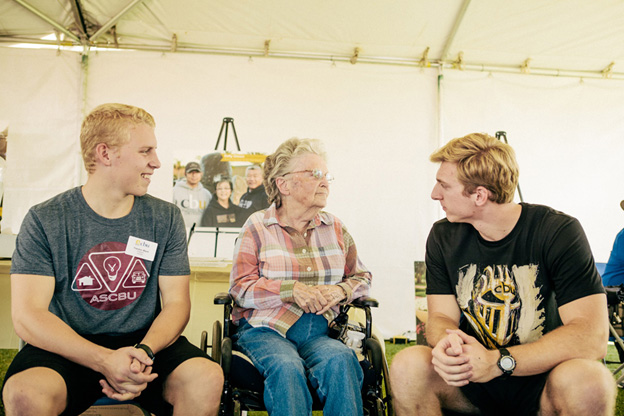 Price’s connection to the university dates back to 1965 when Price joined the staff at California Baptist College as the nursery director. Over the next several decades, her positions included student center director, secretary to the Registrar, assistant bookkeeper, manager of the café named in her honor (Wanda’s) and alumni consultant.

Over her many years of service, she earned the love and respect of both students and faculty, who presented her with numerous awards, including “Definite Contribution to College Life,” and “Outstanding Staff Member.” She had the reputation of having an excellent memory with her ability to remember students’ names and their student ID numbers.

While Price served in many positions through the years, it was her interaction with the students that stood out.

“She would just step up wherever she was needed or wanted,” said Gail Ronveaux, director of alumni and parent relations. “People would stop her in the hallway and say ‘my grandma just died’ and she would pray with them. Or they would tell her that they had financial difficulties and she would introduce them to someone who might be able to help.”

“She was important to a lot of people because of the relationships she built with them,” Carrie Smith, alumni and parent communications manager, said. “She was a surrogate mom and grandma to a lot of these students. She was the one a lot of them went to when they had a problem. She was the listening ear.”

An article in The Banner newspaper in April 1989 told of Price learning to skateboard. She also ran a 10K race in Death Valley in 1985. Her favorite hobbies included reading, jogging, flying a kite, and watching baseball; she was an Angels fan.

In 1991, when a new snack bar opened in the basement of the James Building, it was named Wanda’s Place, in her honor. The café was relocated to the Eugene and Billie Yeager Center when it opened in 2003.

In 2010, she was recognized as the longest-serving employee in CBU history. CBU president Dr. Ronald L. Ellis presented her with a leaf from a 1611 edition King James Bible containing her favorite scripture passage (Philippians 1:3). Ellis also gave her a baseball that was signed by a professional baseball player in 1965, the same year she came to work at CBU.

Price worked at CBU until the spring of 2011.

“If I could instill anything into students it would be: learn to love and take the risks,” Price told The Banner in 1989. “Learn to love one another, and it would eliminate 99 percent of our problems. And always remember, it's no fun hugging yourself!"