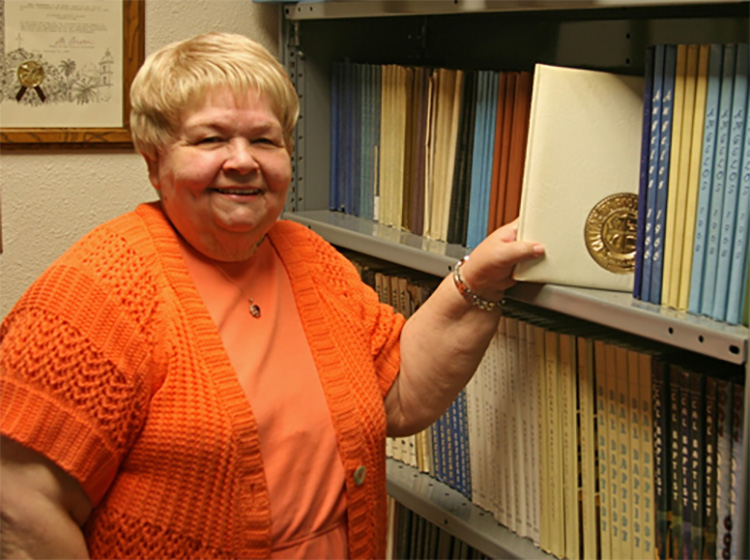 Riverside, Calif. (June 12, 2017) –Vi Estel, former CBU archivist, has filed her last book; she retired June 2 at the age of 74. During her career at CBU, Estel became the go-to person for research pertaining to history on California Baptist University and the California Southern Baptist Convention (CSBC) for the past 13 years.

“My story is they looked around campus for the oldest Southern Baptist and there I was, so they asked me to come and be the archivist,” quipped Estel, who originally started in the Office of Admissions at CBU in 2002. “That was one of the strengths I brought, because I’ve lived the history, both of this school and of the convention.”

Estel’s connection to CBU predates her years as an employee. She graduated from CBU in 1964, met her husband at CBU, served on the Alumni Association Board and two of her sons attended CBU. She formerly worked at the CSBC and currently is president of the California Baptist Historical Society.

One of her tasks as an archivist was responding to calls from church historians and researchers seeking information on projects. CBU is home to the Southern Baptist Depository and Archive that resides on the second floor of the Annie Gabriel Library. The depository has become a prominent source of information on Southern Baptist life and thought with its collection that contains nearly 3,000 books on church history, biblical studies and theology. Additionally, there is also a California Baptist University Queenie Simmons Archive dedicated to CBU history. The archive provides access to CBU yearbooks, campus publications, photographs and other historical documents. It also includes historical records and photographs related to the history of Tahquitz Pines Conference Center.

Estel described archiving as a never-ending job. She worked on digitizing photos and issues of The Banner (campus newspaper) and the Roundtable magazine (alumni publication). She also archived and ensured proper storage of historical outdated electronic media such as reel-to-reel film, reel-to-reel recordings and even wire recordings.

There will continue to be photos to identify, scan and store, but Estel said that is a good thing.

Estel said she was grateful to be a part of God’s work at CBU.

“One of the things I’m most grateful for and proud of is how, even in exponentially dramatic growth, CBU is still keeping the main thing the main thing, and that is its Christian heritage and roots,” Estel said. “No matter what you study here, you are impacted by the truth of God’s Word.”

After retiring, Estel said she plans to continue her ministry as director of senior adult ministries at Magnolia Church in Riverside.