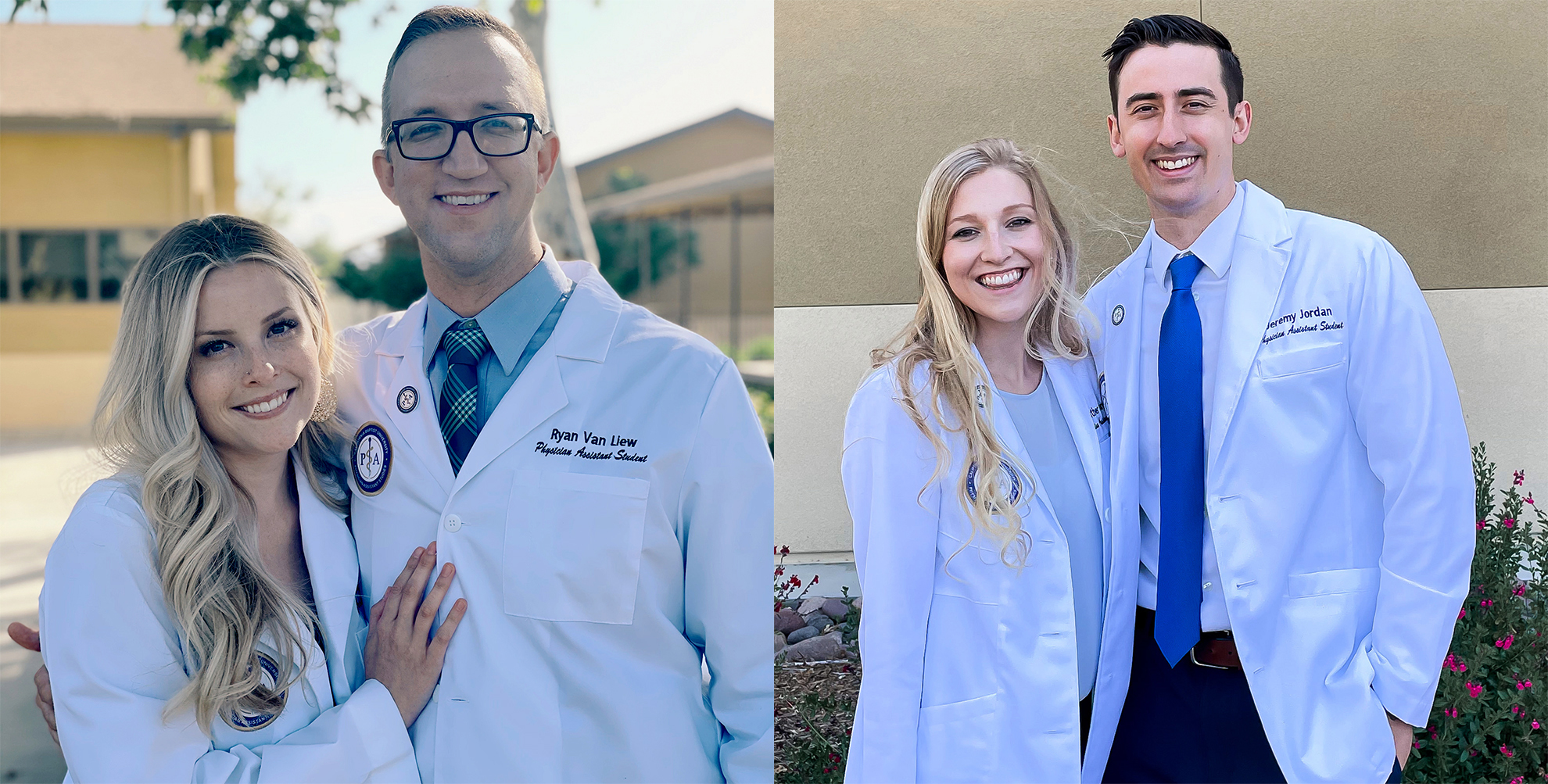 From left: Lindsey and Ryan Van Liew and Heather and Jeremy Jordan are enrolled in the Master of Science in Physician Assistant Studies.

Riverside, Calif. (June 10, 2021) – The Master of Science in Physician Assistant Studies at California Baptist University is an intensive two-year program. But two married couples have the advantage of built-in study partners as they go through the program together.

Jeremy and Heather Jordan and Ryan and Lindsey Van Liew are part of the cohort of 30 students who are finishing their first year in the program.

The Jordans met in microbiology class at Azusa Pacific University. They had each decided to pursue becoming physician assistants before they met.

“It fits everything that I wanted. We both have a big heart for service,” Heather said. “With healthcare, I’ve had the desire to be able to go on mission trips and serve.”

The Van Liews met while working as paramedics in southern Riverside County. Lindsey planned to become a physician assistant. Ryan considered fire service before deciding to go into the medical field. They then went to CBU for their undergraduate degree before pursuing their master’s. They were married April 2019.

“We love CBU. Their approach to education was really nice,” Lindsey said. “We liked that it was centered biblically. It was pro-science but also pro-Jesus. It felt right.”

Both couples say being in the program with their spouse is beneficial.

“Sometimes I say it’s like we have a cheat code, even though we’re not cheating,” Ryan said. “Two heads are better than one in a lot of ways. We both have strengths and weaknesses, and we definitely play off each other’s strengths.”

Lindsey said the couple is not competitive in school, though Ryan will annihilate anyone playing cornhole and ping pong.

“It feels like we have this advantage of having somebody there to quiz you and keep you on your toes,” Lindsey said. “He’s like a built-in study buddy.”

Heather said while they may joke about it, they are not competitive with each other and often get similar scores on assignments and tests.

“Cardiology was a harder subject for me, but Jeremy got it so naturally. It was awesome for him to be able to explain things to me,” Heather said. In turn, she helped Jeremy with women’s health and pediatrics.

To make sure they do not study 24/7, the Jordans observe a Sabbath, from 6 p.m. Saturday to sundown Sunday.

“It’s been really refreshing that Saturday we close the books, and we don’t pick them up until the next day,” Heather said. “We don’t have the guilt, ‘We should be studying.’ This is Sabbath time and we’re trusting that God wants us to rest at times, too.”

Similarly, the Van Liews set aside 24 hours starting Friday evening to have date night or see friends and family.

“We just build in the time to have fun and be together,” Ryan said.

Between being in the same academic program and staying at home during the pandemic, the couples have not seen a downside of spending so much time together.

“I don't get tired of him, and he doesn't get tired of me,” Lindsey said. “I'd rather be hanging out with him because we have a lot of fun together. School hasn't changed that.”

“I think both of us have only experienced benefits so far,” Jeremy said. “We work well together.”

“I haven’t gotten sick of him yet!” Heather said. “I think that’s characteristic of our relationship. We complement each other well. I do the organization and schedule things and Jeremy …”

The Jordans said they appreciate CBU’s program and faculty and the time together.

“We’re super thankful to CBU and our program for the opportunity that they gave us to do this together. It’s building such a strong foundation both for our career and our relationship,” Heather said.

“The professors really model a Christian life. To me that’s inspiring. As PAs, we want to be able to model that, but it can be challenging,” Jeremy said. “CBU is preparing us well for that.”

The Van Liews agreed with those views.

“With my purpose being to help others and help them live longer, more fulfilling lives, I think the faculty are showing they're walking that walk with us so that we could turn around and demonstrate the same for our patients and be there for them,” Ryan said.

“It's actually such a privilege to go in it with your spouse. I totally would suggest it for any married couple looking to do this,” Lindsey said.