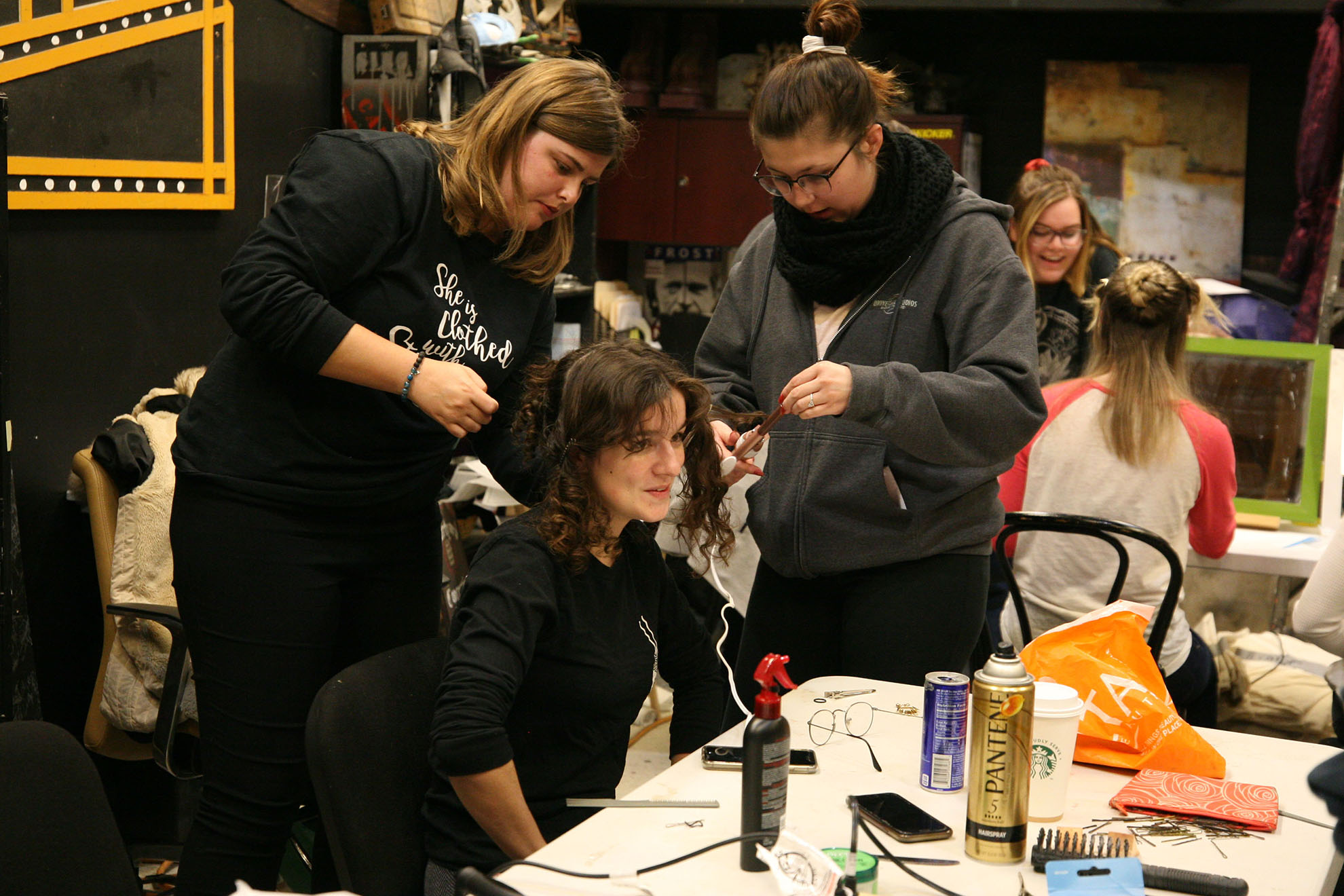 Riverside, Calif. (Feb. 15, 2019) – As audiences enjoy “Pride and Prejudice” performances at California Baptist University this weekend, there will be another production going on behind the scenes.

The costume and makeup crew will give the actors the right look, the backstage crew will move scenery and props into place at the right time and the lighting and sound operators will make sure the actors can be seen and heard clearly. The week leading up to a play at CBU is known as theatre tech week. Students, who are working on the play, labor to bring all the elements needed for the show together.

Included in the theatre program curriculum is technical practicum, where students get hands-on experience, said Lee Lyons, professor of theatre. They also learn how to cast a play and direct it, Lyons added.

“Our behind-the-scenes crew are incredibly important—they keep the show on course and ensure everything is moving smoothly,” said Amanda Rountree, guest director for “Pride of Prejudice.”

Nicole “Koli” Marks, a theatre junior and an assistant designer for hair and makeup, was tasked with researching fashion styles of the early 19th century. Putting on a play is a team effort, Marks said.

“As a performer, you can’t get up on stage unless you have an awesome backstage team,” Marks said.

Joanna Ingold, an English sophomore, is assistant director of “Pride and Prejudice.” She watched rehearsal scenes closely with the director in order to offer instructive feedback to the cast.

“The most fun is seeing it progress,” Ingold said. “I’ve watched every single stage of this thing. I’ve seen it since the actors were reading lines.”

Among her many jobs as assistant stage manager, Tyler Shelley, a theatre junior, makes sure everyone has their props and is in position at the right time.

“It’s super important for any actor to work backstage. There are some actors you can tell who have worked backstage. It comes through in their work ethic onstage and in rehearsals because they’re respectful with their props and their time,” Shelley said. “Working backstage, you learn the other side and it’s not more or less work, it’s just different. You get to see all sides of it.”

Lyons said that the skills the students are learning behind the stage is valuable to becoming a part of a professional theatre production team.

“Even if they are an actor by trade, they need to have the ability to make plays, to be effective in the theatre no matter what position they’re in,” Lyons said.