The U.S. Constitution was written for “do-it-ourselves citizens,” lecturer says 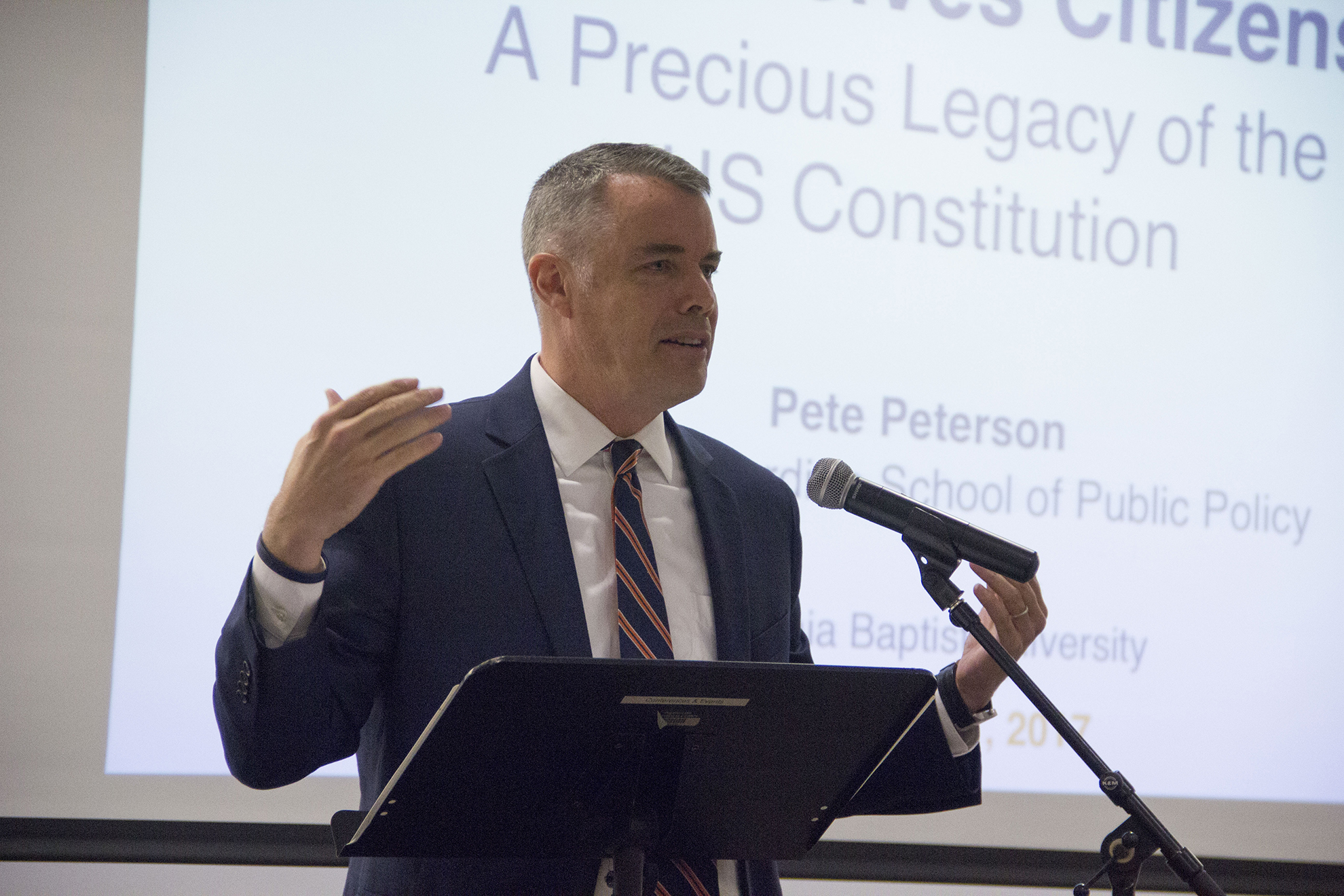 Pete Peterson, dean of the Pepperdine University School of Public Policy, speaks at California Baptist University for a Constitution Day event on Sept. 22.

Riverside, Calif. (Sept. 22, 2017) – The U.S. Constitution was written to establish a limited government for unlimited citizenship engaged in the common good, Pete Peterson, dean of the School of Public Policy at Pepperdine University, told an audience at California Baptist University on Sept. 21. Peterson spoke at a Constitution Day event, marking the signing of the U.S. Constitution on Sept. 17, 1787.

“The Constitution provides an outline for a free people to work with and independently from government, in the provision of services and the creation of community, from disaster recovery on a massive scale to disaster recovery at the personal level,” Peterson said.

Peterson serves on the leadership council for California Forward, a nonprofit organization that aims to inspire better decision-making by governments at all levels. He is also a national speaker and writer on issues related to civic participation and the use of technology to make government more responsive and transparent.

“In the First Amendment, we see a wall built, not between government and religion but between Congress and the establishment of churches and the free exercise of believers,” Peterson said. “It is through this mechanism that the founders laid the groundwork for the world’s most vibrant civil society, once again shaped by people of faith.”

Peterson highlighted the writings of Alexis de Tocqueville, a French diplomat who visited the United States in the 1800s and then wrote about his experiences in the “Democracy in America.” Faith’s ability to form self-governing citizens while providing them opportunities to exercise this self-governance surprised Tocqueville, Peterson said. Tocqueville also warned that if religion would lessen then Americans would become more demanding of government, Peterson added.

Peterson said government does not have the capacity to meet all of the people’s needs. Citizens today are demanding more customized attention and service, Peterson added, calling it the “Amazonification” of government.

“If citizens can order a television online for delivery tomorrow, why can’t they get their street repaired or school fixed or crime reduced by tomorrow?” Peterson said.

Government is simply incapable of adequately addressing all the people’s issues, Peterson said. However, a multi-sector response involving government alongside the civic and private sectors, such as in the relief responses to hurricanes Harvey and Irma, gives Americans a chance, Peterson argued.