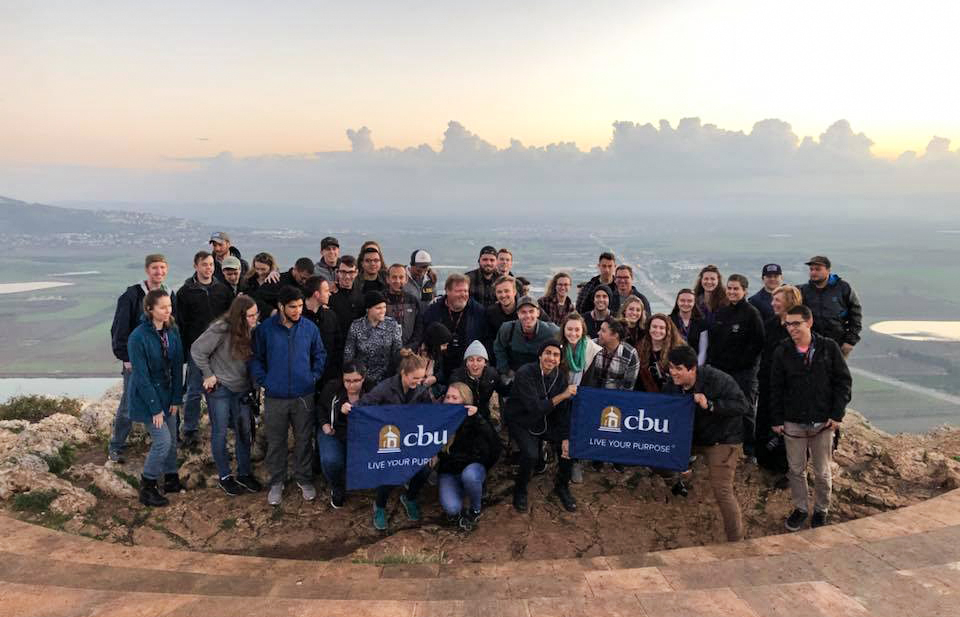 Riverside, Calif. (Jan. 22, 2018) – A group from California Baptist University traveled to Israel from Dec. 30–Jan. 10 for the chance to examine many biblical locations and to become more aware of the geopolitical factors of the area.

Jillian Helt, a biology sophomore, said the trip brought the Bible to life.

“Having seen the locations and topography of the land, I now have a deeper understanding of biblical stories including character motivations, geography and history,” Helt said.

The Israel trip, sponsored by the Philos Project and the Museum of the Bible Foundation through Passages, a tour agency, provides financial assistance for Christian college students seeking a guided tour of the Holy Land. The CBU group consisted of 39 students and four faculty members.

The group visited biblical sites including Nazareth, the Jordan River and the Mount of Beatitudes. They also took a boat ride on the Sea of Galilee, visited the Garden of Gethsemane and experienced the Lord's Supper at the Garden Tomb. Participants also joined Jewish families for a Shabbat (Sabbath) dinner.

Abigail Cate, a nursing sophomore, said a highlight on the trip was singing worship songs on the Sea of Galilee.

“Seeing the biblical sites we have always heard about was like watching a picture turn into a reality,” Cate said. “It shocked me how real and ordinary the sites were, yet they were a reminder that Jesus uses the ordinary to bring God glory.”

The group also visited Tel-Aviv, the Western Wall, the Christian and Arab quarters in the Old City of Jerusalem and Yad Vashem, a Holocaust museum. They heard from an array of speakers, including Jewish, Christian and Muslim leaders in addition to college-age Israelis, who were serving in the Israel Defense Forces.

Dr. Dawn Gilmore, assistant professor of music, who had Jewish ancestors that died in the Holocaust, said knowing that her relatives’ names are listed in the Holocaust museum had significance for her. To be in a museum that memorializes the tragedy and helps people understand what happened was very moving, she added.

Akeem Bentick, a philosophy junior, said the trip gave him a new perspective on the situation in the Middle East.

“I witnessed the daily lives of the people. I was amazed to see calmness in their daily lives and how there were friendly interrelations between the Palestinians and Israelis in Jerusalem,” Bentick said.