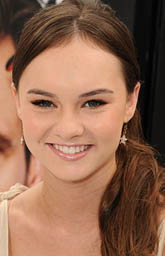 Carroll is an actress who started working as a child in films such as “Swing Vote” alongside Kevin Costner and “Mr. Popper’s Penguins” with Jim Carrey. More recently she appeared in “I Can Only Imagine” and “God Bless the Broken Road.”

Carroll shared her testimony including a decision she made to walk away from a role after reading a script that was filled with profanity.

“I couldn’t do it. It didn’t have the message I wanted to put out,” Carroll said.

Carroll said the actress who was cast for the role she turned down went on to win awards and secure multiple movie deals.

“It was so hard knowing what I was giving up. I knew at the time that it was a big project but my conscience and gut just wouldn’t let me do it,” Carroll said. “I got on my knees and laid my dream down at His feet and told Him I was walking away. I told God that I did not want it anymore, that I was done—but that if He did want me here as an actress, He had to give me a sign and give me something.”

Carroll said the next day God answered her prayer.

“This director called the following day and said he had a role for me in the movie, ‘I Can Only Imagine,’ and I knew that was God saying ‘you can only imagine what I have in store for your life,’” Carroll said.