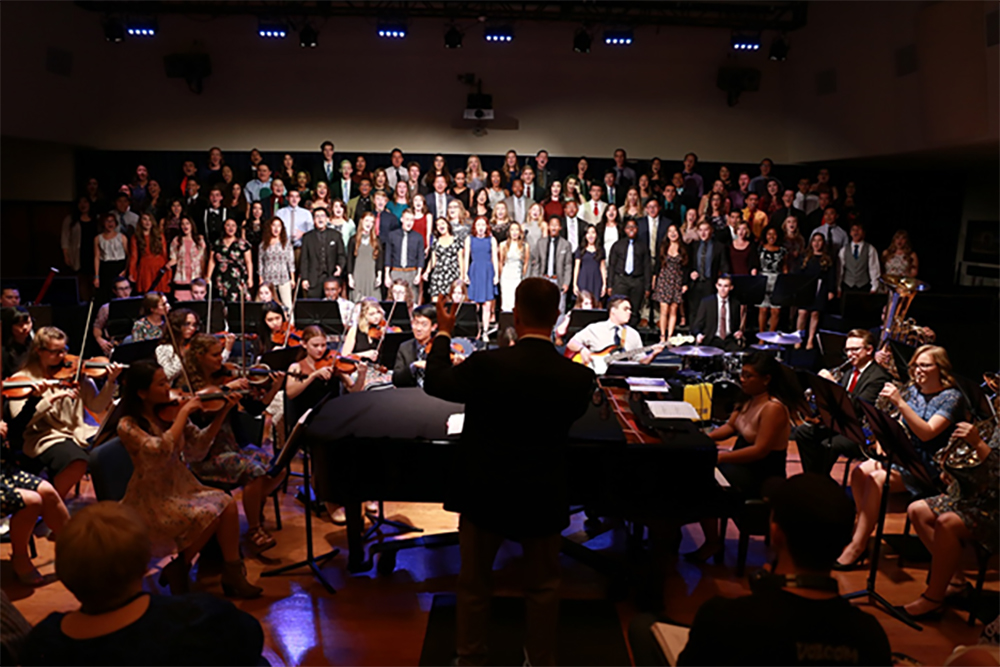 Riverside, Calif. (Aug. 15, 2018) – The sounds of the Shelby and Ferne Collinsworth School of Music are now available to thousands of U.S. churches thanks to a partnership with LifeWay Worship.

In January 2018, University Choir and Orchestra recorded 10 new songs and arrangements on campus with LifeWay executives, technicians and producers from Nashville.

The new tracks are part of LifeWay’s Red Box program that ships out a quarterly “box” catalog of new musical arrangements with listening demos to more than 20,000 U.S. churches. In addition to these preview boxes, the music is also distributed online. Last year alone, 90,000 different churches purchased musical resources from LifeWay, said Dr. Joseph Bolin, dean of the School of Music at CBU.

“We in the School of Music are excited to partner with our friends at LifeWay Worship to impact thousands of churches nationwide,” Bolin said.  “This year’s new CBU anthem series—featuring 10 new songs written and arranged by CBU’s worship board and faculty, recorded by our students in CBU’s own studios and distributed by LifeWay Worship in Nashville—is the genesis of a vision that utilizes the musical community of CBU to resource the church with fresh, anointed music for effective ministry.”

School of Music faculty members and the worship degree’s steering and development board wrote the songs produced for the LifeWay project.

The songs represent a broad cross-section of worship styles such as contemporary, virtuosic choir and orchestra anthems, congregational and presentational.

“The unifying factor is that it’s to the glory of God and it’s theologically accurate and done with excellence,” Bolin said. “But it’s meant to express the breadth of everything that we are and do in the School of Music.”

Don Koch, an award-winning record producer and songwriter, served as the producer of the project.

Bolin said working with industry professionals is something he wants students to experience.

“The recording sessions also provided our students the opportunity to work with industry professionals, which is a big hallmark of our vision,” Bolin said. “We want to consistently expose our students to the best in the music industry so they can be prepared to meet the demands of their own musical careers.”

Anthony Baker, a music education junior, said the students had a couple weeks to learn the music, giving them real-life experience.

“It stretches our music ability,” Baker said. “It shows us how professionals work. As a music major, it shows me what my future could be like.”

Bolin said he is grateful to CBU’s administration for the support and the vision to engage in these type of collaborations and expand the impact and influence of the School of Music.

“We’re thrilled to be walking through these substantial doors that the Lord has opened for us,” Bolin said. “The work and mission of CBU is continuing to advance and we’re so privileged to be part of its global impact.”