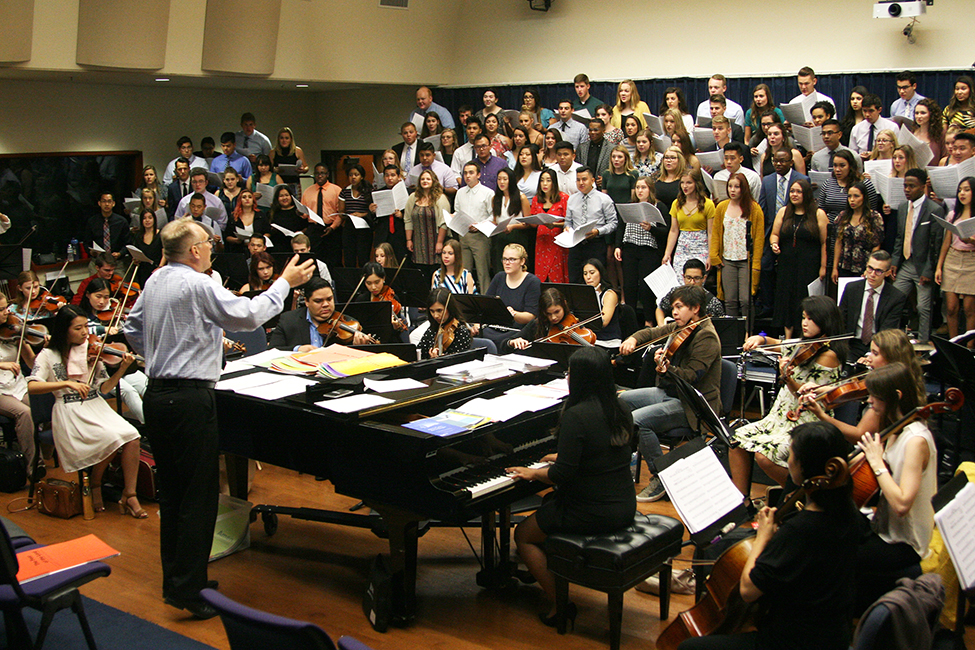 Riverside, Calif. (Aug. 28, 2018) – Members of the University Choir and Orchestra at California Baptist University rehearsed the worship hymn “Just a Little Talk with Jesus” on Aug. 28. It was one of many songs they would rehearse over the course of a seven-hour practice day.

A week before the fall 2018 semester begins at CBU, more than 460 students are already on campus for Rehearsal Camp, hosted by the Shelby and Ferne Collinsworth School of Music on Aug. 27-30 and Sept. 3. The camp helps students prepare for numerous concerts scheduled during the upcoming academic year.

“The purpose of Rehearsal Camp is to give our ensembles a jump start for the year,” said Dr. Guy Holliday, director of bands at CBU. “Lots of music is learned in a compressed period of time, helping the groups to be even better prepared for their first performances.”

Last academic year, student performance groups combined to present more than 220 concerts. Ensembles at CBU include large groups such as the University Choir and Orchestra, with nearly 180 vocalists and instrumentalists, in addition to smaller groups such as the Jazz Band and Women’s Choir. The groups perform at a variety of venues that in the past have included high schools, community events, church services and CBU events.

Steven Dahlgren, assistant professor of music, said the camp gives students a start on perfecting the repertoire and creating camaraderie.

“It’s hard work that reaps huge dividends individually and corporately,” Dahlgren said. “The students learn to build stamina for the long haul, work together for a unified goal, build lifelong relationships with each other and once again begin to produce the quality and excellent music that the Collinsworth School of Music is known for.”

Stephen Bankole-Wright, a music education senior, said the camp is hard work but beneficial in its format.

“If we didn’t have an intense week that gives us a general feel for the songs, I don’t think we would be as prepared,” Bankole-Wright said.