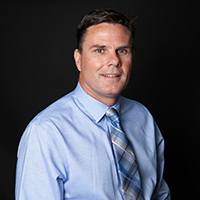 He, Jessica Ducsay, research associate in public health sciences at CBU, and his students work to develop and study effective drug prevention approaches in the community.

For the ninth consecutive year last fall, LaChausse received a Drug-Free Communities grant from the Centers for Disease Control and Prevention.

The Drug-Free Communities Support Program aims to mobilize community leaders to identify and respond to the drug problems unique to their community and change local community environmental conditions tied to substance use.

Recent headlines have told of youths’ deaths due to fentanyl and other synthetic drugs. This is despite the fact that adolescents’ use of marijuana and illicit drugs have remained steady or decreased since 2000, according to a survey by the CDC.

However, trends in the legalization of recreational marijuana in many states, including California, and the subsequent increase in marijuana advertising and access to marijuana may influence adolescent marijuana use and normalize substance use, LaChausse said.

“Changes in adolescents’ perceptions of the harmfulness of using marijuana is diminishing and societal acceptance of marijuana use and other drugs is rising,” LaChausse said.

Substance use among adolescents is a complex issue, LaChausse said. Reducing adolescent substance use through universal, evidence-based drug education programs that work is essential.

With the Drug-Free Communities Support Program, LaChausse has received $125,000 each year while working with the Healthy Jurupa Valley Coalition and Reach Out, a local nonprofit, to create an infrastructure that reduces youth substance use.

In 2012, the city of Jurupa Valley approached him to help in that area. The initial goal was to decrease youth access to tobacco and alcohol.

“There are numerous factors at the individual, family and community level that can lead to substance use,” LaChausse said. “The reason why teens participate in health risk behaviors is that they are not taught and given the opportunity to practice skills to avoid, manage or escape situations that can lead to participating in behaviors like drug and alcohol use.”

The purpose of the coalition is to help the community do a better job with substance abuse prevention, he said.

“We want to create a norm in the city of Jurupa Valley where the people who live in this community don't use drugs, they don't smoke, they don't use alcohol. They look out for each other,” LaChausse said.

The grant money goes toward various areas, including:

A success for the coalition was having the city council approve a social host ordinance, a law intended to hold individuals responsible for hosting or knowingly providing a place for underage drinking. It passed in April. The grant money pays for a subcontract with the sheriff's department. Occasionally, during a night shift, two deputies, along with coalition members, look only for parties involving minors drinking to educate the community and enforce the ordinance.

“If you don't enforce that ordinance and you don't create awareness of that ordinance, then the norms in the community don't change,” LaChausse said. “We found out that if you can reduce accessibility, like where kids can actually access these substances, that can really decrease whether or not they'll use them.”

He has focused mostly on youth in his research. LaChausse always has been interested in why people do what they do.

“Why do people do what they do even though they know it's bad for them?” he said. “What we're trying to do in the lab is figure out why do people behave in ways that are unhealthy for them and then what are the best strategies to change their behavior? … Which types of programs and interventions can best steer kids clear of these risk behaviors?”

Through his research, LaChausse seeks to help local communities.

“You don't have to go to the far reaches of the globe to find people who need help. Jurupa is six miles away. We can do God's work in our own backyard,” he said. “That's the reason why I have CBU students help me as research assistants. It gives them an opportunity to see how science and research are conducted, and they’re out there doing the work.”