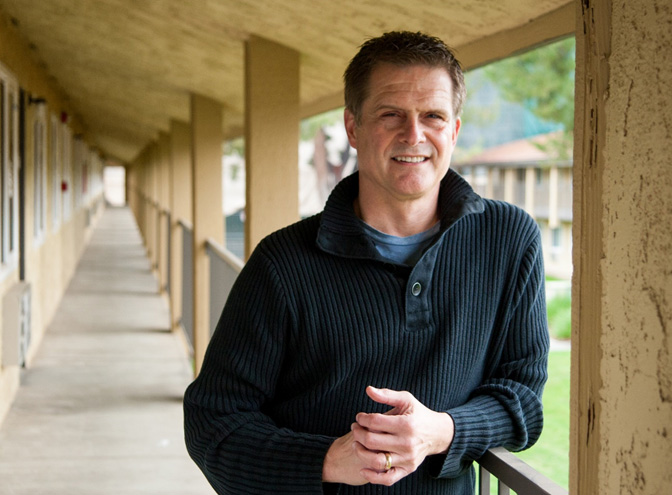 Riverside, Calif. (July 31, 2016) — Dr. Dan Wilson regards the Bible as a book that is meant to be understood. But, he concedes, it contains texts that might require some mental “wrestling.”

“I really believe that you can understand the Bible,” said Wilson, professor of biblical studies at California Baptist University. “We typically don’t understand it because we stop reading and stop trying when we don’t instantly understand.”

When it comes to understanding “troubling” portions of scripture, Wilson said some students have expressed concern about certain biblical texts.

“I get questions about things that seem bizarre to them, things that might even be disturbing to us today,” Wilson said. “It’s OK to be disturbed by what we read in the Bible but we need to pay attention to what God is doing and what God is saying to his people.”

Wilson, who served as founding dean of the CBU School of Christian Ministries, teaches several courses including Old and New Testament Survey and Biblical Interpretation. His dissertation at Southwestern Baptist Theological Seminary focused on the idea of “the Messianic Secret” in the gospels. Wilson examined connections between the concept in the gospels, primarily in the transfiguration narratives, and secrecy elements in the later Old Testament writings.

Wilson enjoys teaching the Bible to believers as well as those who do not identify as people of faith.

“I sense from a large percentage of my students an eagerness to study the Bible and to see if it has any relevance for their day-to-day life,” Wilson said.

Wilson also believes that understanding the Bible should affect the way we live.

“I want my students to see me putting into practice what’s in the Bible,” Wilson said. “I don’t want to be that person who knows but doesn’t practice it.”

After spending decades teaching the Bible, Wilson got a fresh perspective as he traveled to Israel the past several summers. As a member and former chair of the New Orleans Baptist Theological Seminary board of trustees, Wilson participated in an excavation project sponsored by the seminary at the site of the ancient Canaanite city of Gezer, near the Mediterranean Sea and the Aijalon Valley.

“Being in Israel changed my perspective on the Bible,” Wilson said. “I had a muted perspective beforehand, but after walking alongside the Sea of Galilee, through the old city of Jerusalem, and among the olive trees at Gethsemane, I read the Bible in vivid color now. I hear the voices more clearly; I taste and smell and feel the biblical story in ways I never did before.”

Those experiences, he added, motivate him to bring the Bible to life for his students.