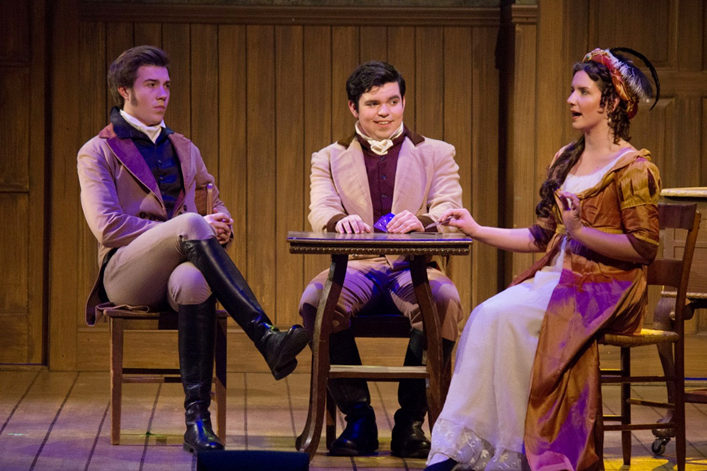 Riverside, Calif. (Feb. 13, 2019) – The theatre program at California Baptist University is bringing the wit and romance of Jane Austen's classic 1813 novel “Pride and Prejudice” to life in a fast-paced and engaging adaptation. The first showing at Wallace Theatre starts on Feb. 15 at 7 p.m.

The plot of the production sticks closely with Austen’s novel. For Elizabeth Bennet, the main character of the play, finding a husband is hardly on her priority list. However, with four sisters, an overzealous matchmaking mother and a string of unsuitable suitors, it is difficult to escape the subject. When the independent-minded Elizabeth meets the handsome but enigmatic Mr. Darcy, she is determined not to let her feelings triumph over her good sense.

“I would love for people to come away with a greater love and appreciation for Jane Austen,” said Amanda Rountree, the play’s guest director. “I would love for audiences to realize that she had and still has a lot to say about human nature and about the way that we interact with each other.”

One of the main themes in the storyline is making first impressions, said Rountree, who is a seasoned director, playwright and artist with theatre credits across Southern California. The message behind the play is to caution people against hasty judgements, Rountree added.

“How do we let first impressions color our understanding and our interactions with people and how do we overcome our first impressions and really truly learn to know and see other people well and love them well?” Rountree asked of the central theme of the play.

Emily Feaster, a theatre senior who plays Elizabeth, said “Pride and Prejudice” is one of her favorite stories.

“The best part of playing this role has been watching this classic novel come to life on stage and being a part of that process,” Feaster said. “The most challenging [aspect of my character] has probably been marrying the accent with the text. Austen’s words are much more elevated than what we are used to and it’s also beautiful but more of a challenge with the added layer of the British accent.”

Rebecca Patty, a Christian studies and theatre junior who plays Mrs. Bennet, said she has expanded her acting range to play this dynamic character.

“She is the most eccentric and high-energy character I’ve ever had the opportunity of playing. I’ve learned so much about how big I can make a character, and what I can do with my voice and mannerisms to bring a fictional person to life,” Patty said.

“What I hope the audience gets out of the play is that one should not judge a book buy its cover,” Rydelski said. “When one digs deeper, they are able to find the true humanism behind first impressions.”