RIVERSIDE, Calif. (Jan. 28, 2016) -- The revitalization of The Point at California Baptist University has received a beautification award from the Keep Riverside Clean and Beautiful (KRCB) program. 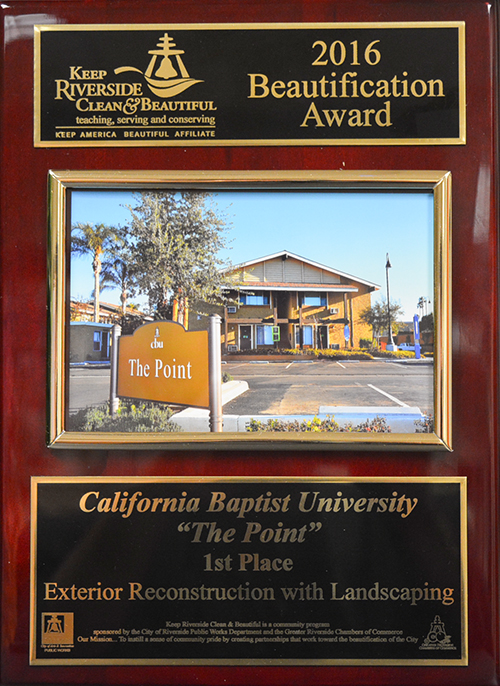 CBU received first place in the category of Exterior Reconstruction with Landscaping. Mayor Rusty Bailey and Cindy Roth, CEO of the Greater Riverside Chambers of Commerce, presented the KRCB awards during the annual State of the City address on Jan. 28. Mark Howe, CBU vice president for finance and administration, accepted the accolade on behalf of the university.

"This award represents CBU's continued commitment to improving our campus and the community at large, which we represent," Howe said.

KRCB is a community-sponsored program by the City of Riverside and the Greater Riverside Chambers of Commerce. Its mission is to foster a sense of community pride by creating partnerships that work toward the beautification of the city.

In the summer of 2015 the last section of The Point remodeling was completed. The former San Carlos apartment complex located on Adams Street now features multiple office suites and a team room for the CBU wrestling program, as well as student living areas.

The 2016 award is the second consecutive first place finish for CBU in the Exterior Reconstruction with Landscaping category. The 2015 award was for the remodeling project known as Lancer Plaza North.