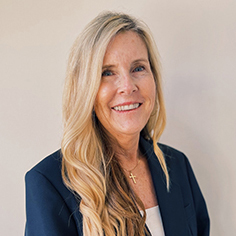 The American Association of Colleges of Nursing (AACN) selected her and 29 other nursing faculty from 150 applicants from across the nation to participate. The event brought together faculty with Apple experts to develop digital projects around curriculum for nursing programs.

Herrera’s project focused on interprofessional partnerships, which bring students from various healthcare disciplines together to learn from, with and about each other in order to improve healthcare outcomes.

Every year since 2017, CBU has held an interprofessional education disaster simulation for its graduate students in health care programs. The event is the culmination of the interprofessional instruction students receive throughout the year. The past two years, the activity was virtual due to the pandemic.

The virtual event led Herrera to discover a gap when teams worked together online, she said. A software online program they used was not interactive and only one person could input information at a time. Searching for a solution, Herrera found an Apple program—Numbers—that allows for synchronous activity in collaborative groups.

“It will enhance a team’s ability to collaborate together so that everybody has access and everybody has buy-in,” Herrera said. “It’s more versatile.”

The program would help meet the needs of interprofessional education and bring in more community partners, such as other universities and public agencies, Herrera said.

“We have a lot of community partners that may not be able to be present, but they can come in synchronously, in a virtual activity,” she said.

Leading up to the digital academy and at the event, Herrera worked with Apple experts to learn more about the software program and other digital apps and tools to use in the classroom and the disaster simulation. She also learned about letting students be more responsible for their own learning by using creativity and tapping into the digital world more, she said.

“We're going to be giving them digital tools to be able to make decisions together,” Herrera said.

Herrera said although she considers herself digitally minded, she sometimes feels she is slipping behind. The digital conference sparked excitement. Now she hopes to inspire students and fellow faculty members.

“The minute we stop changing the learning environment we become old school. We have to change with the culture, and while it's really difficult to do that, it's critical,” Herrera said. “I can walk through here and look at glazed over students in a lecture format with a PowerPoint on the screen and trust me, they are not engaged. They are used to highly interactive things, and we have to continue to meet that need.”