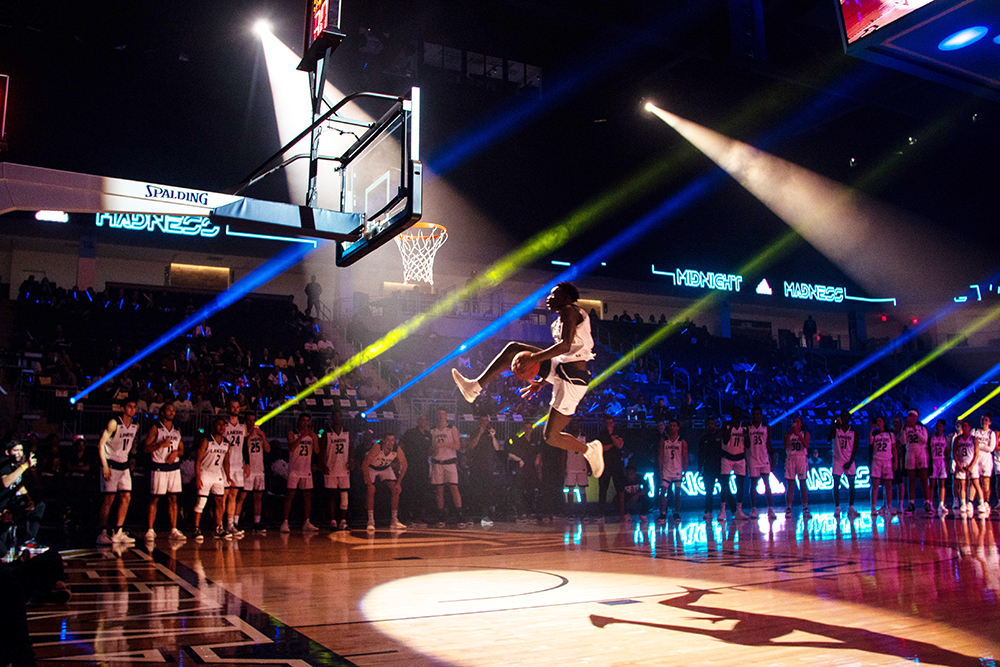 Riverside, Calif. (Oct. 29, 2018) – Angela Stevenson, a sociology junior at California Baptist University, stood near the entrance of the Events Center waiting for the doors to open for the Midnight Madness event on Oct. 26. Behind her, a line stretched down Lancer Lane, with thousands of fans ready to welcome in the new basketball season at CBU.

Neon lights adorned the Events Center along with a Midnight Madness projected logo that seemingly danced throughout the building’s exterior in step with the high-energy music that played in the courtyard. For Stevenson, the evening is a time of fun, high energy and lots of school spirit.

“I like the way CBU puts on events. They go all out and they try to ensure everyone has a sense of school spirit,” Stevenson said. “I think when there is a large group of CBU students together, everyone gets hyped and it's a good environment of people having fun.”

Students began queuing hours before the start of the event to obtain prime seating for one of the most popular activities at CBU. Midnight Madness featured routines by the CBU dance and cheer teams, an introduction to both the men’s and women’s basketball squads, a 3-point shooting contest and a dunk competition.

Angelique Gutierrez, a biology freshman, attended her first Midnight Madness event. Gutierrez said she was impressed with how high the players jumped during the dunk contest.

“I really enjoyed the dunk contest. To see the players jump so high, it was cool,” Gutierrez said.

The upcoming basketball season will be the Lancers’ first in NCAA Division I.

“We feel so very blessed to have the home court that we do," said Rick Croy, men's basketball head coach. "From the enthusiastic student body to the vested community behind us, our athletes compete in one of the great environments on the West Coast."

CBU's women tip off their season on Nov. 7 at home against Idaho State University. The men’s squad hosts San Diego Christian College on Nov. 9 for its first game.