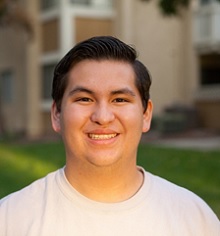 In his role, Mitose will oversee the ASCBU executive council, which is tasked with representing the student body at CBU on matters that enrich the undergraduate experience through service, collaboration and campus improvement.

Mitose credits his role as a resident advisor (RA) that made him venture out to try out bigger leadership roles at CBU.

“My favorite part about my job is building a community with guys where we can talk about our faith,” Mitose said. “I feel like you can grow a lot, especially in your freshman year. Helping the guys in my hall and watching them grow has been my favorite part.”

“He really does a good job connecting with other people. When people interact with him, they feel genuinely cared for and loved.” Hassler said. “He has a really deep heart for people.”

Giorvi Alvarez, a mechanical engineering freshman and a resident in Smith Hall, said he considers Mitose a role model.

“A few weeks ago, I was going through a rough patch in my life. I told him about it. He really helped me get through it.” Alvarez says. “I plan my life a little too much, and he told me, ‘Sometimes, you just have to leave it to God and see what happens.’ Hearing that from him made me realize that I should just relax and see what happens.”

Growing in his role as RA, made Mitose interested in exploring other leadership roles.

Mitose said that he was encouraged to run for ASCBU president.

“During the election, I had a lot of support. Knowing that the student body believes in me means a lot,” Mitose said.

As president, Mitose said his priority is to ensure everyone’s voice is heard.

“Every idea and complaint has substance and value. I want to create a warm environment for people to come up to me and tell me what is wrong. I’m willing to listen to them,” Mitose said.

Mitose also wants to be accessible to students in order to make an impact on their lives.

“My goal is also to be as sufficient as possible with the help of my executive council, to use our resources wisely and to advance student satisfaction,” Mitose said. “As president, I really hope people get a lot from what I do. I hope to be able to train and help the people who will be in this position as well, so they may run the council in the most efficient way possible.”

For Mitose, succeeding as the next ASCBU president can prepare him for his career pursuits of becoming a CEO of a hospital.

“I think our healthcare systems and healthcare in a lot of hospitals could be managed better,” Mitose says. “Hopefully, I could get the opportunity to be able to manage a hospital to the best of my ability.”