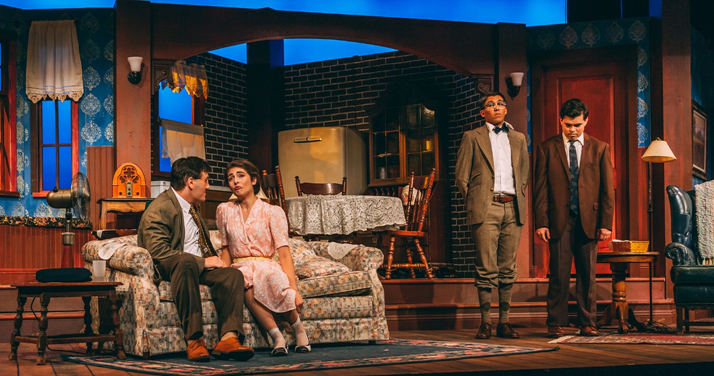 Riverside, Calif. (Oct. 10, 2018) – The theatre arts program at California Baptist University brings comedy to the Wallace Theatre with “Lost in Yonkers,” which opens the 2018-19 season.

The Pulitzer-winning play by Neil Simon follows two teenage brothers in Yonkers, New York, set in 1942. After the death of the boys’ mother, their father decides to go on the road as a traveling salesman. He sends his sons to live with their stern grandmother, an adult aunt who is mentally unstable, and an uncle, a small-time hoodlum.

The story is a coming-of-age tale about the boys surviving their “crazy family,” said Frank Mihelich, assistant professor of theatre and the play’s director.

“There is a lot of heart and a lot of thought-provoking stuff going on in this play in the midst of all of the laughing,” Mihelich said. “The big theme is how family molds us and affects us.”

Isaiah Torres, a theatre freshman who plays one of the sons, said the production reminded him of the importance of family.

“I really hope the audience connects with the characters and the story,” Torres said. “Not only should the audience expect to laugh but prepare to cry.”

Emily Feaster, a theatre senior who plays grandma, said she learned about grief and the various paths people take to cope through her character.

“To explore the character of someone who has been through so much trauma and portray the effects of that in someone’s life has been so fascinating and heartbreaking,” Feaster said. “It has caused me to reflect on my own life and circumstances and examine how I handle those situations.”

Alexis Safoyan, public relations senior, said through her character—Aunt Bella—she has learned to get to know people before judging them. Once audience members understand Bella, they realize why she behaves the way that she does, Safoyan added.