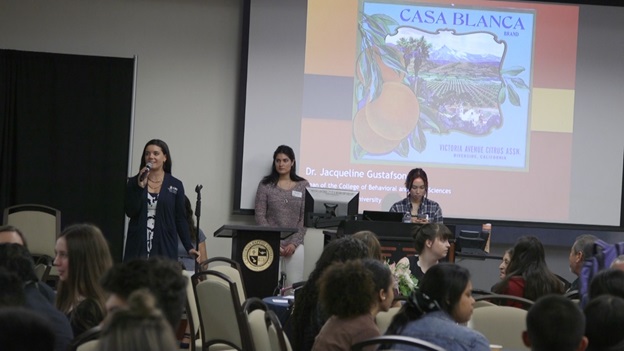 Riverside, Calif. (March 29, 2019) – Hundreds of students from the College of Behavioral and Social Sciences at California Baptist University had the opportunity to learn about the history of a longstanding neighborhood in Riverside on March 28. Several presenters shared research from “The Legacy Project,” which aimed to record the oral history of elderly residents living in the neighborhood known as Casa Blanca.

Over the past several months, some 20 student interns, mostly from the College of Behavioral and Social Sciences, worked in connection with the Council of Independent Colleges (CIC) and the AARP Foundation on the “The Legacy Project.” CBU was awarded a $13,000 grant by the CIC in May 2018 to conduct the research.

For the project, students facilitated interviews, recorded each session and put together footage to display at the event.

Jennifer Costello, assistant professor of social work at CBU, said the goal of this project was to develop, strengthen and maintain relationships between CBU and the adults in the Casa Blanca community.

“Casa Blanca has a rich history and we also want to highlight and preserve this history through residents’ stories and experiences,” Costello told the audience.

During a roundtable discussion, several Casa Blanca residents in attendance had the opportunity to share their thoughts about their neighborhood.

“I can say a lot about Casa Blanca community, but three things could sum it up: we are family, we are neighbors and we are friends,” said Bob Garcia, a longtime resident of Casa Blanca.

Erin Orr, an anthropology senior and an intern for the project, said she felt welcomed into the community through the whole process.

“These people aren’t ashamed or afraid of their community and I really liked seeing that,” Orr said. “They could have said ‘we don’t want outsiders here,’ but they welcomed us instead.”