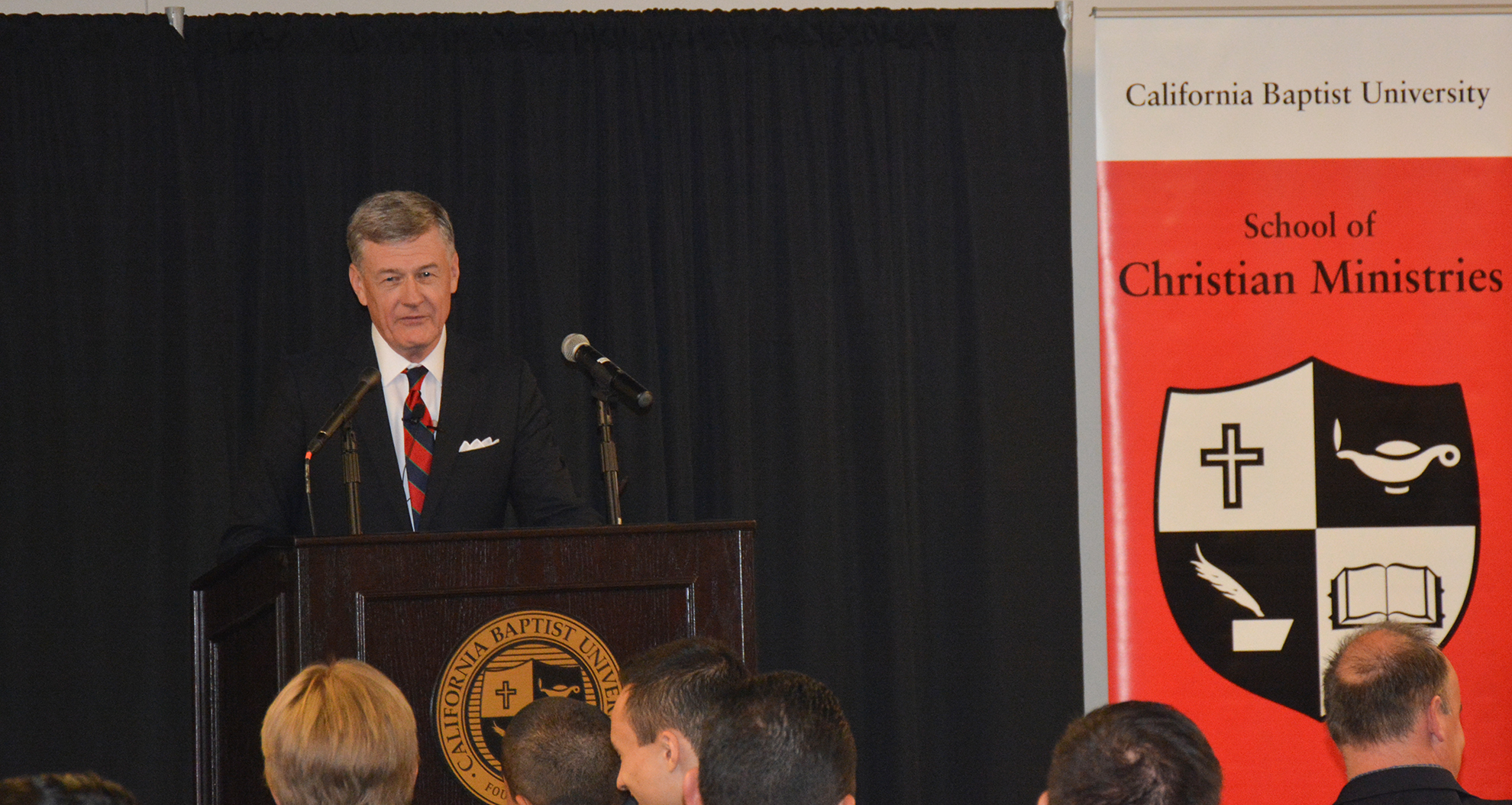 Riverside, Calif. (Oct. 19, 2017)—“We need to be more rooted and grounded in the word of God,” Dr. Steven Lawson told an audience at California Baptist University.

Lawson, director of the doctor of ministry program at The Master’s Seminary, spoke at the Christian Ministries Lecture Series on Oct. 19. Lawson is also an author of numerous books including biographic works on historic Christian figures such as Martin Luther, the famed Reformation founder. The end of October will mark the 500-year anniversary of Luther’s revolutionary “95 Theses.”

“The Protestant Reformation was about recovering the gospel that had been lost,” Larson said. “It was a recovery of the authority of the word of God.”

“Sola Scriptura” or scripture alone is the foundation upon which everything rests, Larson said. It is the principle from which Christians form their beliefs.

“If there is any crack in the foundation, the whole thing comes tumbling down,” Larson said. “If there is any equivocating on the Bible, on the word of God, then the gospel comes crashing down and we rob God of His glory.”

You can never be too grounded in the word of God, Larson added.

“If we are to have another reformation, which we so desperately need, it is going to require a new generation of men and women who are sold out to the word of God,” Larson said.

The Reformation was the greatest “turn-back-to-the-Bible movement” ever, Larson argued.

“Martin Luther was a man who stood for the truth,” Larson said. “He preached the truth and proclaimed the truth even at the risk of his own life. In the face of mounting difficulties and life-threatening adversities, Martin Luther went all in on the word of God.”

Larson highlighted several speeches Luther gave including at the Diet of Worms on April 18, 1521.

“When Luther gave his famous summation, he said, ‘Unless I’m convinced by the testimony of the scriptures, or by clear reason, for I do not trust either the pope or councils alone since it is well-known that they have often erred and contradicted themselves, I am bound by the scriptures,” Larson said reading portions of Luther’s speech.

“There is no other book in all of the world like this book,” Larson said. “Only Scripture can be considered inerrant. That is why Luther was willing to go to the mat for the Scriptures. Not just because he had some religious sympathy, but because he had deep convictions about Scripture.”