Lance ChallengesCBU Graduates To Live A Life of Significance 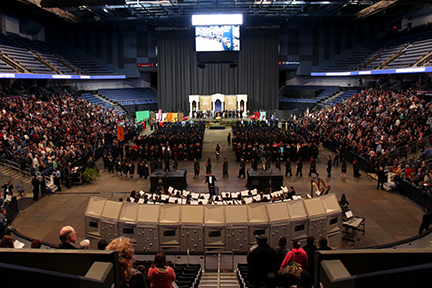 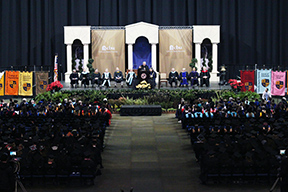 RIVERSIDE (Dec. 14, 2012)—Dr. Thomas Lance, senior pastor at the Grove Community Church in Riverside, urged fall commencement candidates at California Baptist University to commit to a life of significance wherever God placed them.

"Many of you will be getting jobs soon and they may or may not be the career job you hoped for as you start out," Lance said. "But you can make a difference in your very first job if you believe God orchestrates your life, doesn't make mistakes wherever he places you and desires for you to have influence right where He places you."

Lance delivered the commencement address to undergraduate and graduate students of the Class of 2012 during fall commencement ceremonies Dec. 13 in the Citizens Business Bank Arena in Ontario.

During his remarks, Lance says he often encounters people who wish they had made different choices in life or who were never sure if their lives made a difference at all.

"As I have talked with people who feel this way," he said, "it became clear there was never a time in their lives when they purposed to make their life count or a time when they drew a line in the sand so to speak and said, with God's help, this is how I am going to live my life."

Lance charged graduates to make a commitment that their life would count and make a difference in a suffering world.

"You will never know when God will take an ordinary day and turn it into a day that will change the lives of those around you," he said.

Dr. Ellis also presented an honorary Doctor of Divinity degree to Lance in recognition of his  positive work ethic and steadfast commitment to serving Christ through service to others.