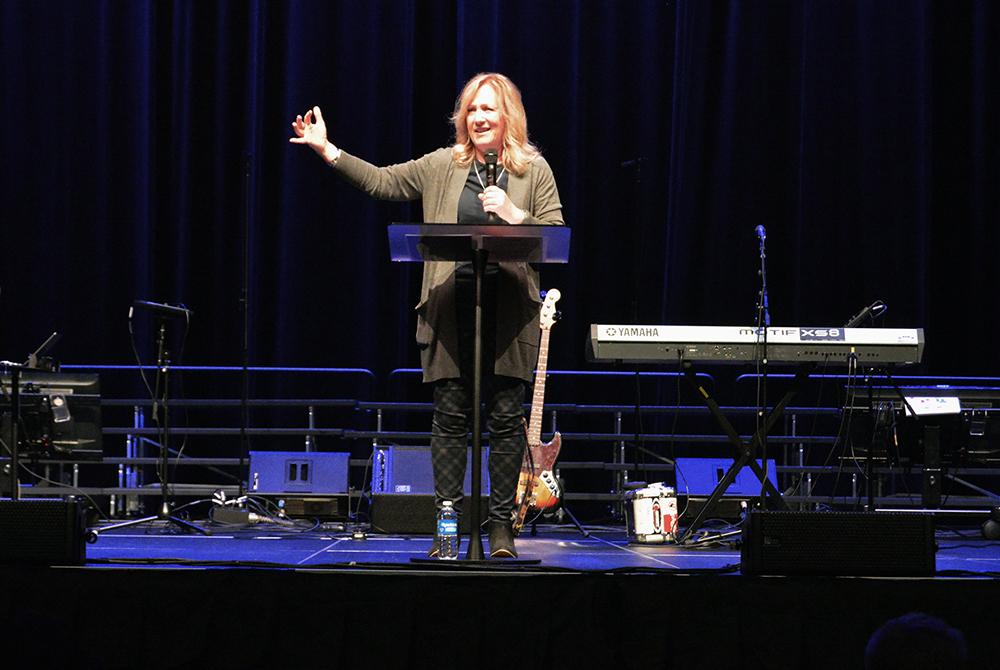 Riverside, Calif. (Jan. 15, 2019) – “What would move some of you in the crowd to be a disciple of Jesus?” Kay Warren asked a California Baptist University audience on Jan. 15.

“Jesus drew a crowd wherever He went. It was usually people looking for a miracle. These were people in deep need,” Warren said.

Warren is co-founder of Saddleback Church with her husband, Dr. Rick Warren (’77), and she is also an international speaker, best-selling author and Bible teacher.

Warren expounded on Mark 8:34: “And He summoned the crowd with His disciples, and said to them, ‘If anyone wishes to come after me, he must deny himself, and take up his cross and follow me.’” (NASB)

“Jesus makes it clear what disciples need to do—deny yourself, take up your cross and follow Him,” Warren said.

Warren said that she has interpreted Jesus’ words in her life to mean, “Be dangerously surrendered, become seriously disturbed and become gloriously ruined.”

“The Bible says to deny one’s self, and that is an unpleasant place to start,” Warren said. Surrender is not an attractive word to Americans, she added.

“Yet in God’s vocabulary, the word surrender is probably the most beautiful word that He ever hears come from our mouths--when we say ‘yes, God, I will do what you want,’” Warren said.

Jesus was so disturbed by people’s sin and their separation from Him, that He chose to come to earth, take up the cross and die, Warren said.

“We get disturbed by things that are about an inch deep, when our world is drowning in things to be disturbed about,” Warren said. “When was the last time something in our world so disturbed you that you moved from that comfortable place, that comfortable life you’re building for yourself, to the place where you said, ‘I have to do something about it?’”

Finally, Christians should aim to be gloriously ruined, Warren added.

“What would it look like if Jesus was able to shift your passions and your priorities in such a way you became ruined for the average, ordinary life and instead you became a disciple who was fully surrendered,” Warren said. “If I’m going to be ‘ruined,’ I want to be ‘ruined’ for the Kingdom of God because it is eternal.”