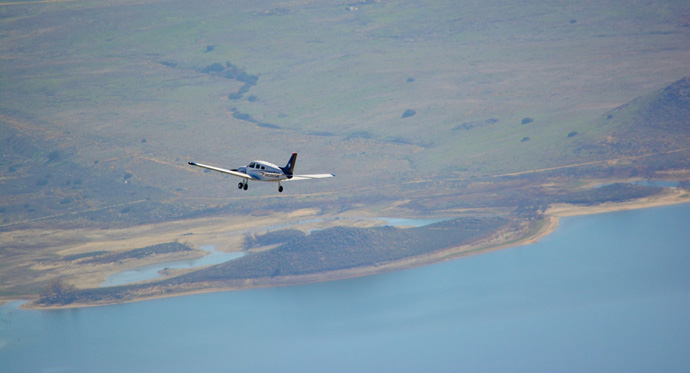 Riverside, Calif. (July 22, 2019) – Mathew Davis, a high school senior from Georgia, soared over Lake Matthews in Riverside as he piloted a Piper Archer. The day was perfect for flying. The temperature was in the high 90s and there were clear skies with little to no turbulence. An aviation science flight instructor from California Baptist University was seated in the co-pilot position, instructing and encouraging him along his flight path.

“Flying a new Piper aircraft was amazing,” Davis said. “I’ve flown small planes before but nothing like this back home.”

The U.S. Air Force offers scholarship opportunities for up to 250 students who participate in their high school AFJROTC chapter to participate in a Flight Academy at various universities over the summer. Twelve cadets, from May 26 through July 22, fulfilled their training at the CBU Aviation Science’s Flight Operations Center located at the Riverside Municipal Airport.

“I’ve enjoyed the instruction I received at CBU,” Davis said. “They have been encouraging this whole time and as a result my confidence has increased in my abilities to fly.”

Dr. John Marselus, chair of the department of aviation science at CBU, said the partnership with the AFJROTC Flight Academy was formed on shared values.

“We are proud to help with the stated goal of AFJROTC of producing good citizens and motivating young men and women to become professional aviators,” Marselus said. “This initiative is one of a kind and hopefully will help toward fulfilling the critical shortage of aviators, not only in the United States but throughout the world over the next couple of decades. There has never been a better time to be involved in aviation as a career.”