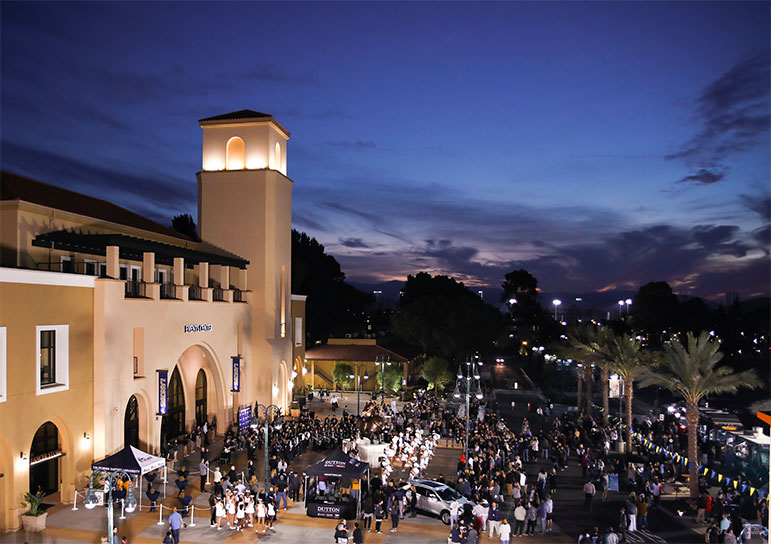 California Baptist University hosts a pregame party for the first men’s basketball game at the Events Center on Nov. 10 as part of Parent and Family Weekend.

The weekend kicked off Nov. 10 with a breakfast in the Recreation Center followed by an opportunity to witness the first basketball game in the Events Center. The women’s basketball team beat California State University, San Marcos 80-63 in front of a program-record crowd (1,024).

"It was a lot of fun out there," said Jarrod Olson, head coach for women’s basketball at CBU. "The Events Center was pretty awesome; it was a great atmosphere. We are happy to get CBU its first win in there."

After the game, students had the opportunity to show their families around the CBU campus including the university’s highly acclaimed dining and housing areas. 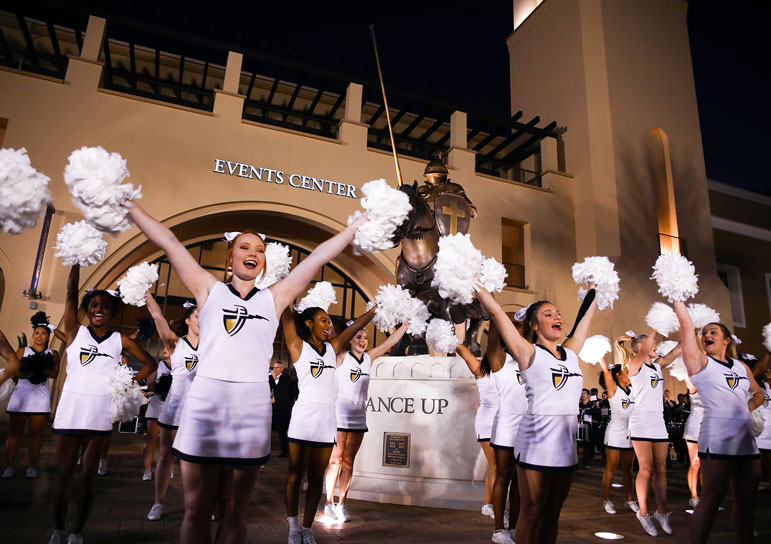 The cheer team at California Baptist University performs a routine at the Events Center plaza during a pregame party hosted at the Parent and Family Weekend on Nov. 10.

In the afternoon at the Events Center’s plaza, CBU hosted a men’s basketball pregame party. The event featured food trucks that lined up on Lancer Lane across from the Events Center. Additionally, the Pep Band at CBU brought a lively atmosphere to the plaza, entertaining thousands of spectators in attendance. As the men’s team arrived in front of the plaza on the team bus, the crowd cheered their arrival. 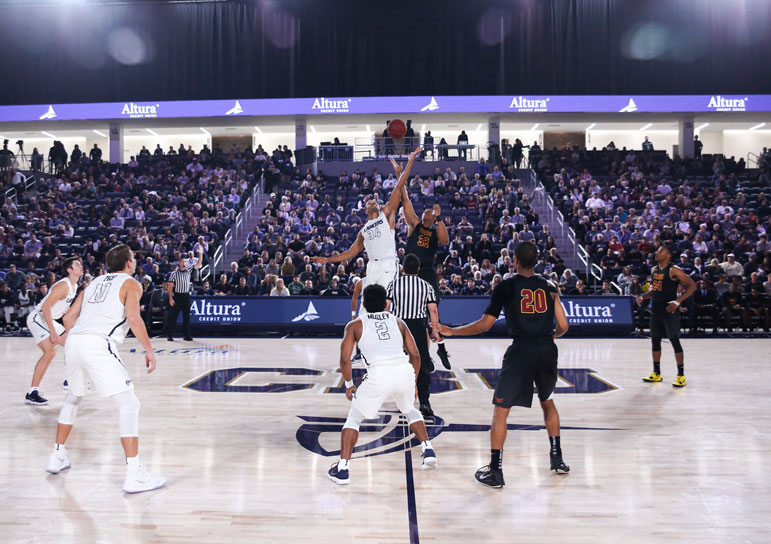 The No. 14 nationally ranked men’s basketball team at California Baptist University won its inaugural game at the Events Center, 83-78, on Nov. 10.

The No. 14 nationally ranked Lancers went on to claim an opening day 83-78 victory over California State University, Dominguez Hills in front of nearly 5,000 spectators.

"First off, we want to thank the Lancer faithful; this was a big night for everybody, for our school, for Riverside, for the Inland Empire and for our guys," said Rick Croy, head coach for men’s basketball at CBU. “I can imagine there wasn't a better college basketball environment anywhere else in the country than at our place tonight." 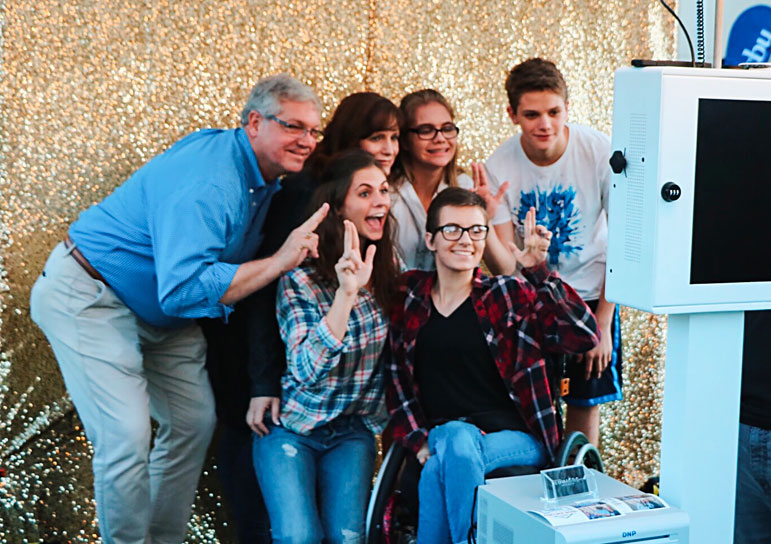 A family proudly displays its Lancer pride by displaying the traditional “Lance-Up” sign at the Block Party on Nov. 11 for the Parent and Family Weekend.

The following day the Parent and Family Weekend included the Block Party where hundreds of event-goers were treated to games and activities for the whole family in addition to a unique art display called “Doors to the World.” The art exhibit featured decorated doors that were created by students from two art classes.

Christian Salley, a freshman at CBU, said the weekend allowed him to bring his passions together.

“I’m passionate about sporting events and combine that with my love for my family, Parent and Family Weekend is a great time for me,” said Salley, while attending the Block Party.

Michael Koenke, father of Ryan Koenke, an electrical engineer junior at CBU, said the weekend activities helped him get a glimpse of his son’s life at the university.

“The basketball game in the Events Center was so much fun,” Michael said. “I’ve also been able to see what my son’s life is like at CBU and that’s been equally fun.” 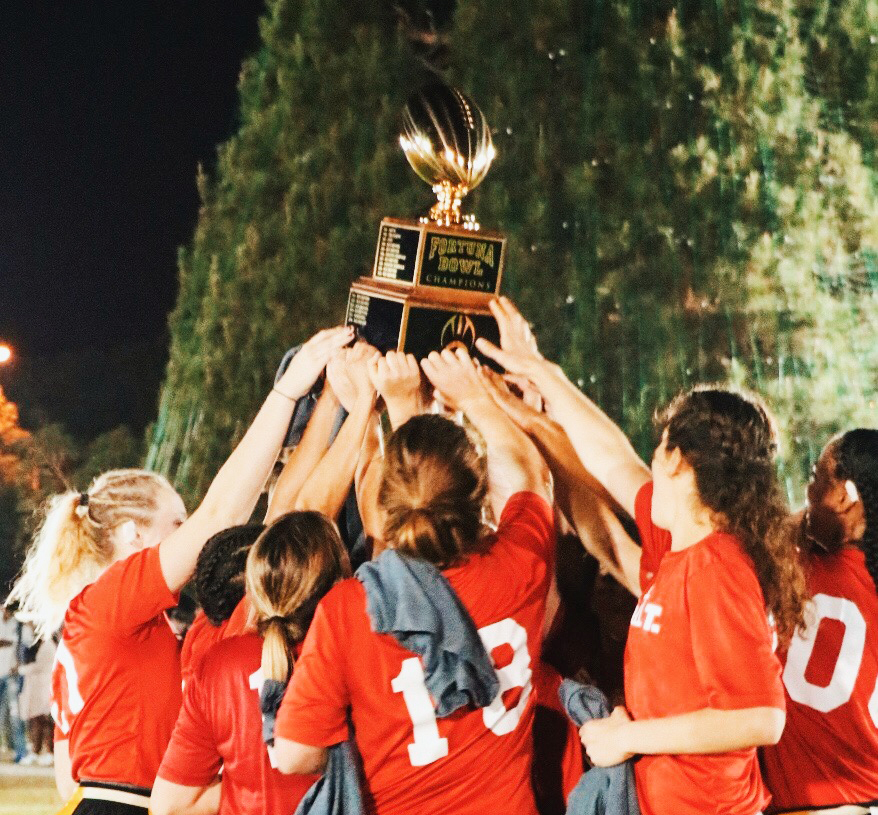 The annual Fortuna Bowl championship intramural flag football games on Saturday evening drew an estimated 4,500 spectators to both games. Team SWAT beat Canadian Bowlers 25-0 in the women’s championship game and team Fruit of the Boom won an overtime thriller over Goon Squad (21-20). The night also featured a firework show after the final championship game and a concert by Kings Kaleidoscope. 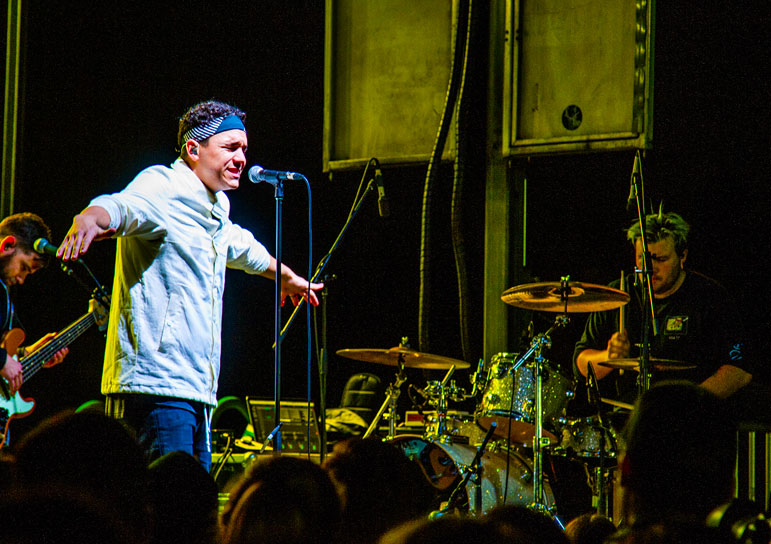 Chad Gardner, lead singer for Kings Kaleidoscope, performs on the Front Lawn at California Baptist University on Nov. 11 as part of the Parent and Family Weekend.