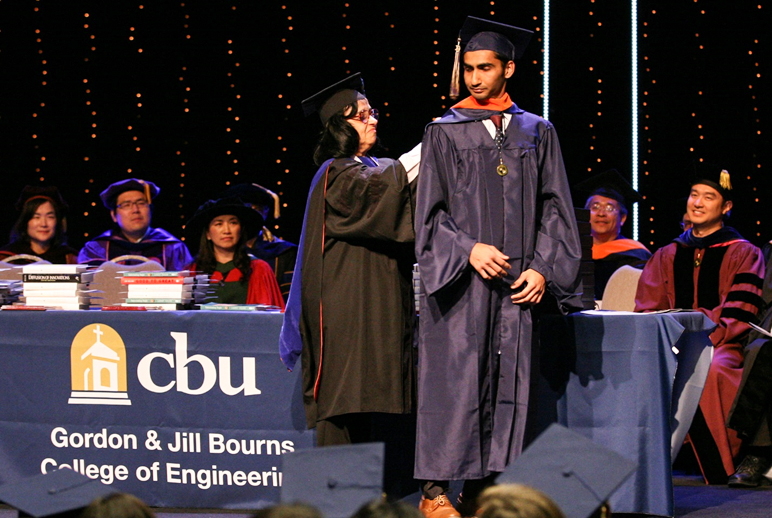 Nearly 540 master’s degree candidates and seven doctoral candidates are eligible to participate in the spring commencements. At CBU, colleges and schools hold individual hooding ceremonies to recognize their candidates and also give students their distinctive colored hoods to wear at their commencement ceremony.

The College of Behavioral and Social Sciences has the largest group of master’s candidates with 182. The Bonnie G. Metcalf School of Education has the second largest group with 108 candidates. Additionally, the Online and Professional Studies division has 95 master candidates and seven doctoral candidates for graduation throughout its various programs.

“I don’t know what is in your future. But I know you’re going out with a blessing, and if you receive it and act in obedience, you’ll accomplish things you didn’t even think were possible,” Dr. Anthony Donaldson, dean of the Gordon and Jill Bourns College of Engineering, told the graduate candidates. “Hopefully in some way you’ve grown in your understanding of who this God is, so that you can go out and serve the one who created you.”

Shailesh Uchale, who earned a Master of Science in Software Engineering, said that during his time at CBU, he learned about different cultures and his purpose in life.

“The people here at CBU supported me in my ups and downs,” Uchale said. “I feel prepared to go onto my next phase of life.”

Shubhada Katke, who also earned a Master of Science in Software Engineering, credited CBU faculty with helping reach her goal of earning a master’s.

“The professors made sure I was on track and doing the right things. I think that’s very important,” Katke said. “When professors help increase students’ skills, that’s the biggest blessing for anybody. Getting skills adds a lot of dimension to life.”