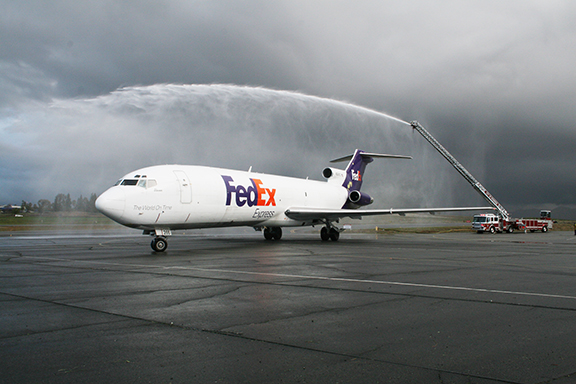 RIVERSIDE (Jan. 10, 2013)--FedEx Express has donated a Boeing 727-200F to California Baptist University for use by its new aviation science program. The cargo jet made its final taxi today after landing at the Riverside Municipal Airport. The aircraft will be on permanent display at the airport and will provide a working laboratory for aviation science students.

"Although this aircraft has reached the end of its useful life in commercial service after 33 years, it is beginning a new life here at the Riverside Municipal Airport as a working lab for CBU aviation science students," said Dr. Daniel Prather, founding chair of the CBU aviation science department. "CBU could not be more pleased with this generous donation from FedEx and appreciates the role of Women in Aviation International in making it possible."

Before its final flight, the aircraft with registration number N266FE provided FedEx with 20 years of service, transporting packages to destinations throughout the United States. The plane is the 60th donation of a Boeing 727 aircraft to various organizations for educational purposes. Prior to its service with FedEx, the aircraft served as a passenger plane for Air Canada.

"FedEx is always proud to give back to the communities where we live and work, and this donation of a 727 from our fleet is a good example of the company's community spirit," said David Sutton, managing director of Aircraft Acquisition and Sales for FedEx. "This marks the 60th aircraft we have donated coast to coast, reflecting the community pride shared by all FedEx employees in support of educational endeavors."

Prather expressed his gratitude to FedEx, and to Women in Aviation International, who opened up this opportunity to its members. "Starting a program with a B727 already on hand is more than I could have ever expected," Prather said. "Thank you, FedEx, for making this a reality!"

The Riverside (CA) Fire Department provides a water arch for the arrival of the Boeing 727-200 that FedEx Express donated to California Baptist University for the school's new aviation science program. The arch represented a symbolic salute on the conclusion of more than 32 years of commercial aviation service by the newly retired aircraft.