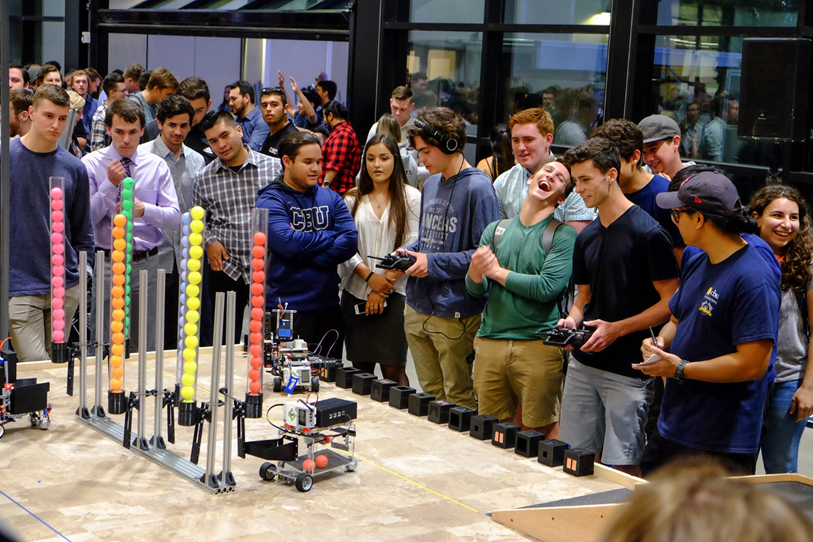 Riverside, Calif. (April 18, 2019) — Tyler Lawton, a mechanical engineering freshman at California Baptist University, felt confident of his team’s robot creation heading into the Design Showcase’s Orb-O-Mania competition. His team worked throughout the semester to construct and program a robot that could collect small balls or orbs in an efficient manner.

“I thought we were going to win because we designed the fastest and most stable bot,” Lawton said.

Lawton, along with team members that were present at the competition—Zachary Foster, Jonathan Gibson, Casey Harrison, Arya Singh, Josiah Salgado and Deepansh Samuel Lal, succeeded in their endeavors. The team won the annual competition hosted by the Gordon and Jill Bourns College of Engineering on April 17.

The event is a competition open for the first-year students within the College of Engineering. Teams were tasked with using Legos, laser-cut and 3D printed parts to create their robots.

Gibson, a civil engineering junior, said teamwork was an important factor in his team’s success.

“You have to rely on your team as much as your own robot. In creating the robot, it helped me gain the knowledge and willingness to work with others,” Gibson said.

The competition is meant to give students hands-on experience in designing and engineering, said Dr. John Butler, assistant professor of electrical and computer engineering.

“Since all the competitors are engineering students, it gets them designing and engineering things early in their academic careers. We teach them an integrative design process where they are continually tweaking things,” Butler said.