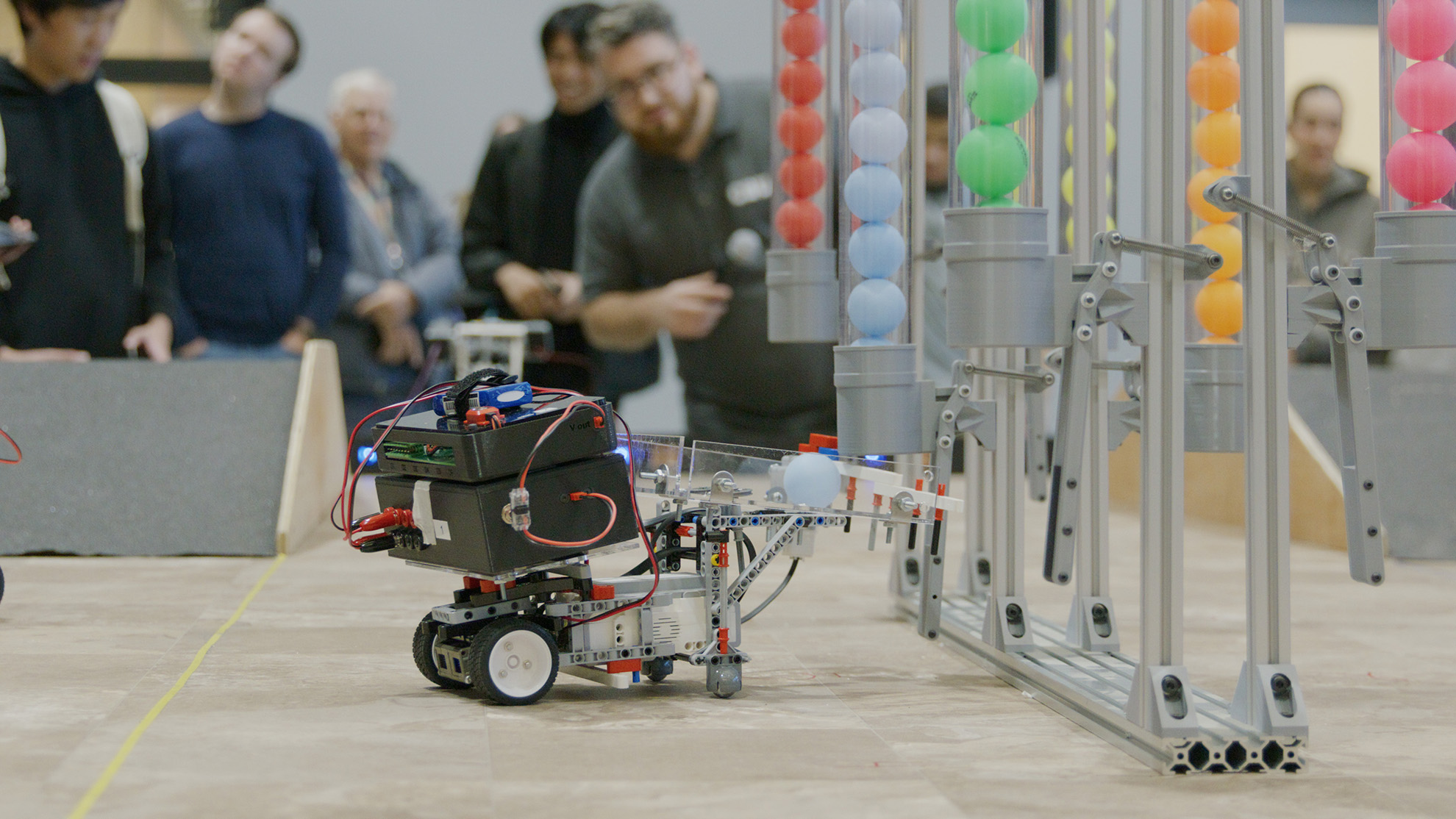 Riverside, Calif. (April 25, 2022) – Students, families and faculty gathered in the Dennis and Carol Troesh Engineering Building at California Baptist University on April 22 to celebrate another year of innovation.

Students in the Gordon and Jill Bourns College of Engineering presented their projects from the year as part of the Engineering Design Showcase. The event featured senior capstone projects, junior design projects and a robotics competition consisting of teams comprised of first-year engineering students.

Dr. Mark Gordon, associate professor of mechanical engineering, said this event is important because it allows students to share their work with others.

“We feel it is important for students to be able to show what they have done,” Gordon said. “It is one thing to get to the end of a course and hand something in but to be able to show it to other people is a valuable thing for them. It gives them extra motivation and also provides a more satisfying experience.” 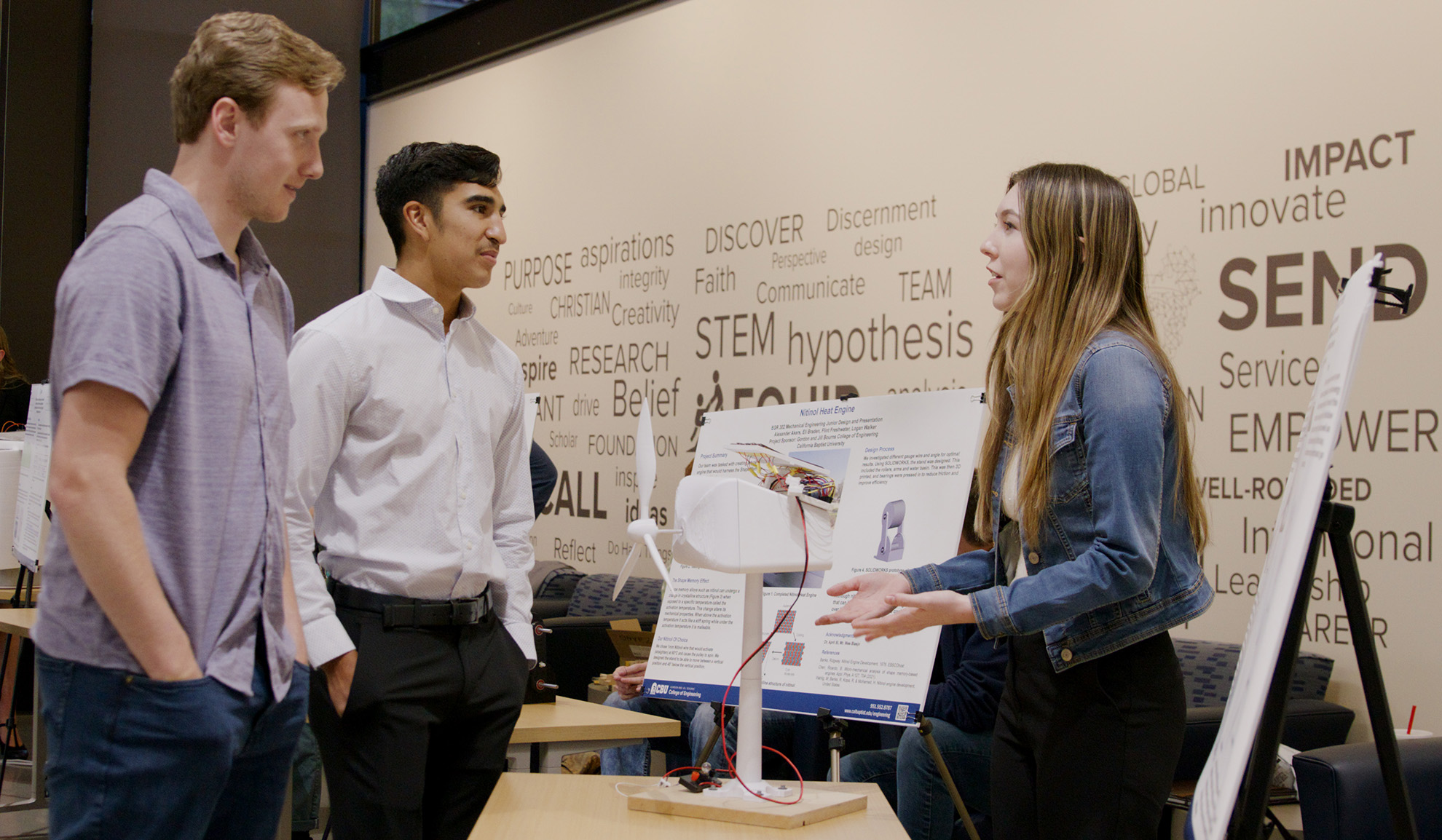 Gordon also emphasized that the design showcase presents first-year students with the opportunity to interact with juniors and seniors to gain a better understanding of what field of engineering they might want to pursue.

Celise Vaughan, a mechanical engineering junior, shared about her team’s junior design project, which was a solar windmill design. The goal of the design was to create a product that could produce both solar and wind energy since neither form of energy is consistent. She enjoyed sharing her work at the showcase, especially after facing several obstacles with parts failing during the design process.

“It’s nice having a finished product,” Vaughan said. “It really is a struggle, especially near the end rushing to get everything done, especially when you hit bumps in the road. It’s nice to be proud of something.”

Jonathan Samonte, a mechanical engineering senior, and his team showcased their capstone project—a miniature, wearable heating and cooling device, which uses ceramic tiles to either heat or cool the user. He said he appreciated the opportunity to share the project he and his teammates had worked on all year.

“There is a sense of finality about it,” Samonte said. “You get to the end of the project and think ‘Wow, that’s a whole year’s worth of effort put into a project.’ Now, we actually get to show people what we were doing for an entire year.”

First-year engineering teams participated in a competition in which robots they designed collected data remotely via sensors. The robots used the information to collect orbs based on amount and color. The robots were judged based on accuracy, the energy spent, the cost and the time taken to complete the task.

Members of the winning team, 8-Bit Butler, said they spent weeks perfecting the design and drawings and building their robots for the competition.

“A lot of it was testing and trying to see if our designs were reliable and if they could withstand running for repetitive times and putting stress on them,” said Joshua Miller, an electrical and computer engineering freshman.

The team encountered some major obstacles, including the challenge of having to redesign and rebuild one of their robots five hours before the competition began. However, the team enjoyed the collaboration throughout the process.

“My personal favorite thing is the team collaboration,” said Bryan Mayen, a mechanical engineering freshman. “Since the beginning, we were all so determined to get that main master plan going. We just let our hearts go toward building these things. That’s what matters—being a team and having good team collaboration.”