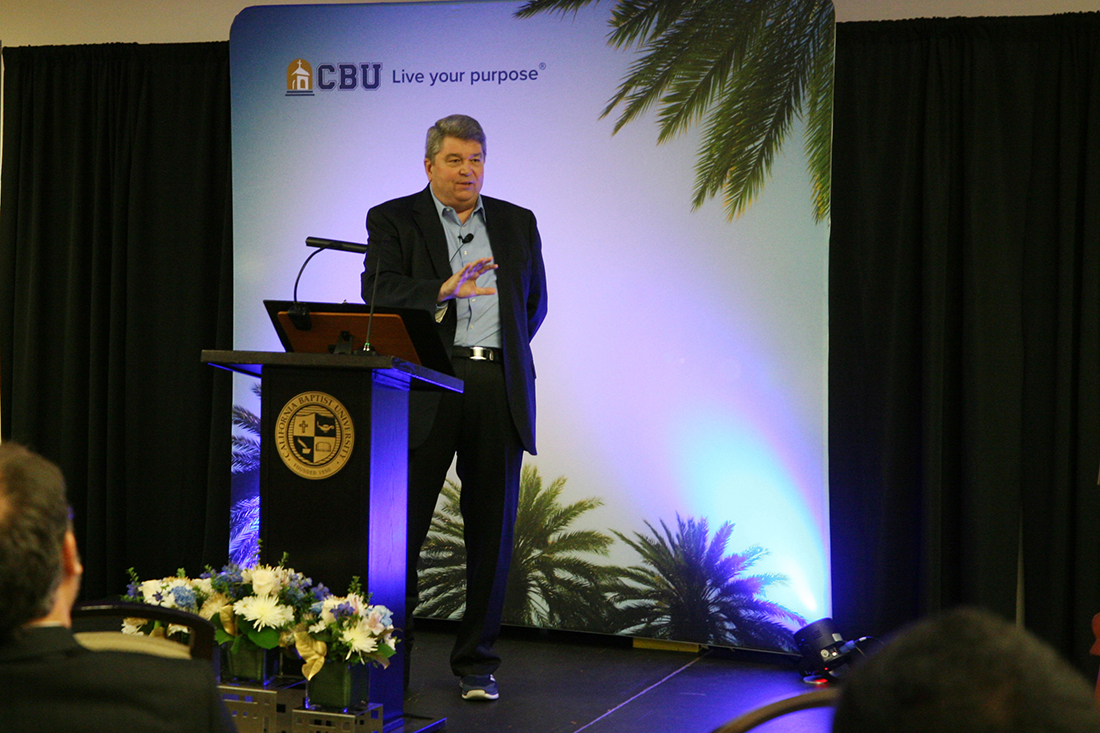 Riverside, Calif. (Nov. 11, 2019) - Dr. Ronald L. Ellis, president of California Baptist University, told an audience that God has used all his life experiences to form his vision of a “university committed to the Great Commission.”

Ellis is celebrating his 25th anniversary as president of CBU this academic year. Ellis spoke as part of the School of Christian Ministries Lecture Series on Nov. 7.

“The vision that I had for this school did not come in a dream, it came through my whole life,” Ellis said. “At the age of 7, in vacation Bible school we had to put our favorite Bible verse on a poster board and I put Matthew 28:19-20 [the Great Commission] which has become my life verse from the very beginning.”

Ellis noted his career path and mentors also played a significant role in maturing his vision. Prior to starting his presidency at CBU, Ellis worked at several institutions of higher learning, learning multiple roles.

Ellis also shared how the extensive research he conducted prior to his interview at then-California Baptist College help him see the potential of higher education in the Inland Empire.

To be a leader, Ellis said, one must “see things out there, see a vision.”

“One of the big tasks of being a leader is to have a vision but to then to stay the course,” Ellis said.

Ellis also noted the importance of surrounding oneself with a good team.

“You are going to be successful in large part depending on the people you surround yourself with,” Ellis said. “One of the principles I have practiced since I’ve been here is every full-time employee that has been hired, I have interviewed and made the hiring decision.”

Since Ellis became president in November 1994 of CBC, enrollment has grown from 808 to 11,045, an increase of 10,237. Under the leadership of Ellis, CBC officially became California Baptist University in 1998 and now features 11 colleges and professional schools, offering more than 150 majors and minors with more than 30 master’s and five doctoral programs.