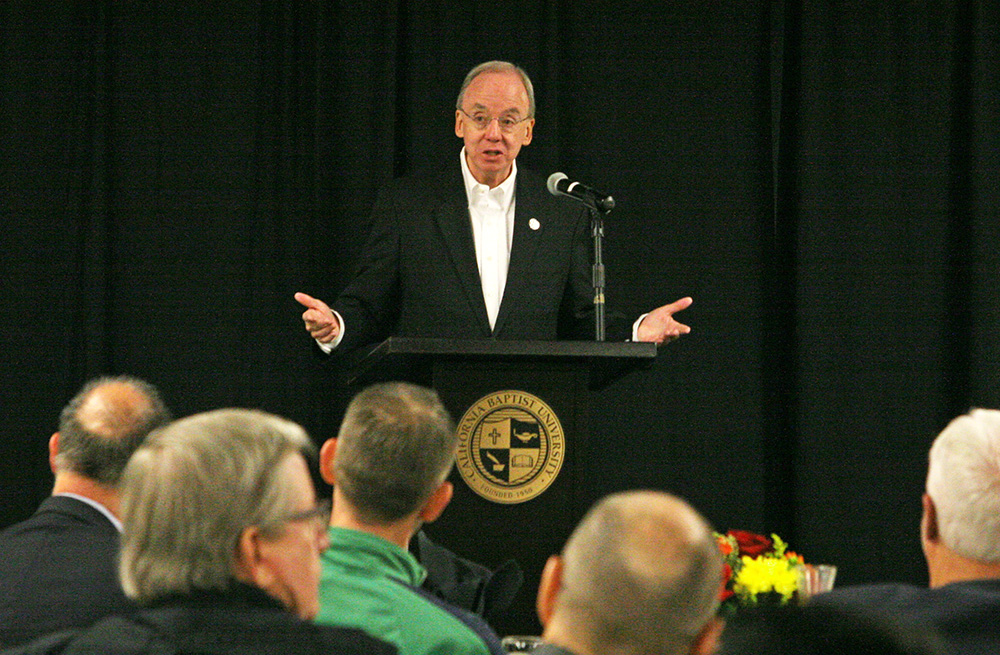 Dockery, president of Trinity International University, spoke as part of the School of Christian Ministries Lecture Series. Dockery is also an author and editor of more than 35 books and has served as chair for the Council for Christian Colleges and Universities.

“The Southern Baptist Convention stands at a pivotal moment in need of re-envisioning the days ahead,” Dockery said. “A new spirit of trust, mutual respect and humility will be needed to serve together.”

“We must be an international people,” Dockery said. “Southern Baptists must come to grips with where they find themselves in a global world and must serve the global church in a new way, becoming more connected and involved internationally than ever before.”

Interconnection also will be necessary, he continued.

“Finding ways for Southern Baptists to hold hands with other believers who are committed to the Great Commission and the Great Commandment will be essential,” Dockery said.

Further, Dockery said, Southern Baptists will need to become intercultural. The denomination must be intentional in how it thinks about engaging the culture in an intercultural and multiethnic way. This will involve finding ways for men and women to maximize their gifts for service in the churches and SBC entities, he added.

“There are 10,000 churches whose membership primarily consists of ethnic minorities across Southern Baptist,” Dockery said. “This progress is to be celebrated. But more work will be needed throughout the life of the entire convention.”

Finally, it is essential that Southern Baptists be intergenerational, he said.

“There will be a need to respect differences in style, priorities, emphases represented among the multiple generations that now make up life in the SBC,” Dockery said. Those in the denomination must continue to develop in these matters, he said.

“Southern Baptists need to trust God to bring fresh a fresh wind of his spirit, to bring renewal to confessional convictions and to revitalize the churches while relating to one another in love and humility,” Dockery said.