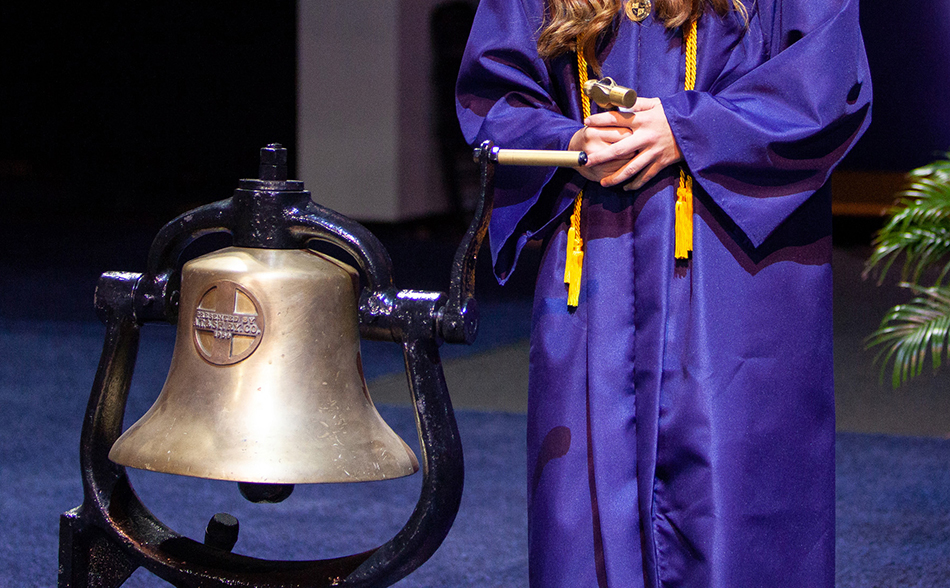 Riverside, Calif. (Dec. 11, 2018) – More than 770 students at California Baptist University are eligible to participate in two fall commencement ceremonies on Dec. 12. In keeping with a CBU tradition, the ringing of a bell will usher them into the Events Center.

The tradition calls for the bell ringing to kick off each commencement. Each toll represents one decade of the university’s existence. The bell will ring six times at each commencement to commemorate six decades of academic excellence. CBU was established in 1950.

In keeping with another aspect of the tradition, graduates from among the highest-ranking students were chosen this fall to ring the bell.

Klehn, whose current GPA is 4.0, said she was honored to be selected as a bell ringer.

“I feel as though I represent all of the graduates and the hard work that everyone has put in to completing their college degree,” Klehn said. “I have pushed myself to honor God in my work, studies, faith and relationships and ringing the bell represents that I have been able to meet those goals.”

After graduation, Klehn will work full time as a ministry assistant for a church in Valencia, California.

“CBU has shaped my faith to be purposeful and meaningful,” Klehn said. “My faith became personal and powerful and I am able to freely talk about it with others as a result of the Christian community I have developed here.”

Cox, whose current GPA is 3.97, said she was thankful to be part of the CBU tradition of the bell ringer.

“Being an online student, I feel even more grateful to the faculty and staff here to be included and considered for this prestigious role,” Cox said.

Cox, who balanced being a full-time student and a full-time employee for the Corona Fire Department, plans to continue working as a fire inspector.

“Going to school at CBU made me a stronger student, leader and a better person overall,” Cox said. “The skills and lessons I’ve learned are ones that I will use in my personal life and career for the rest of my life.”