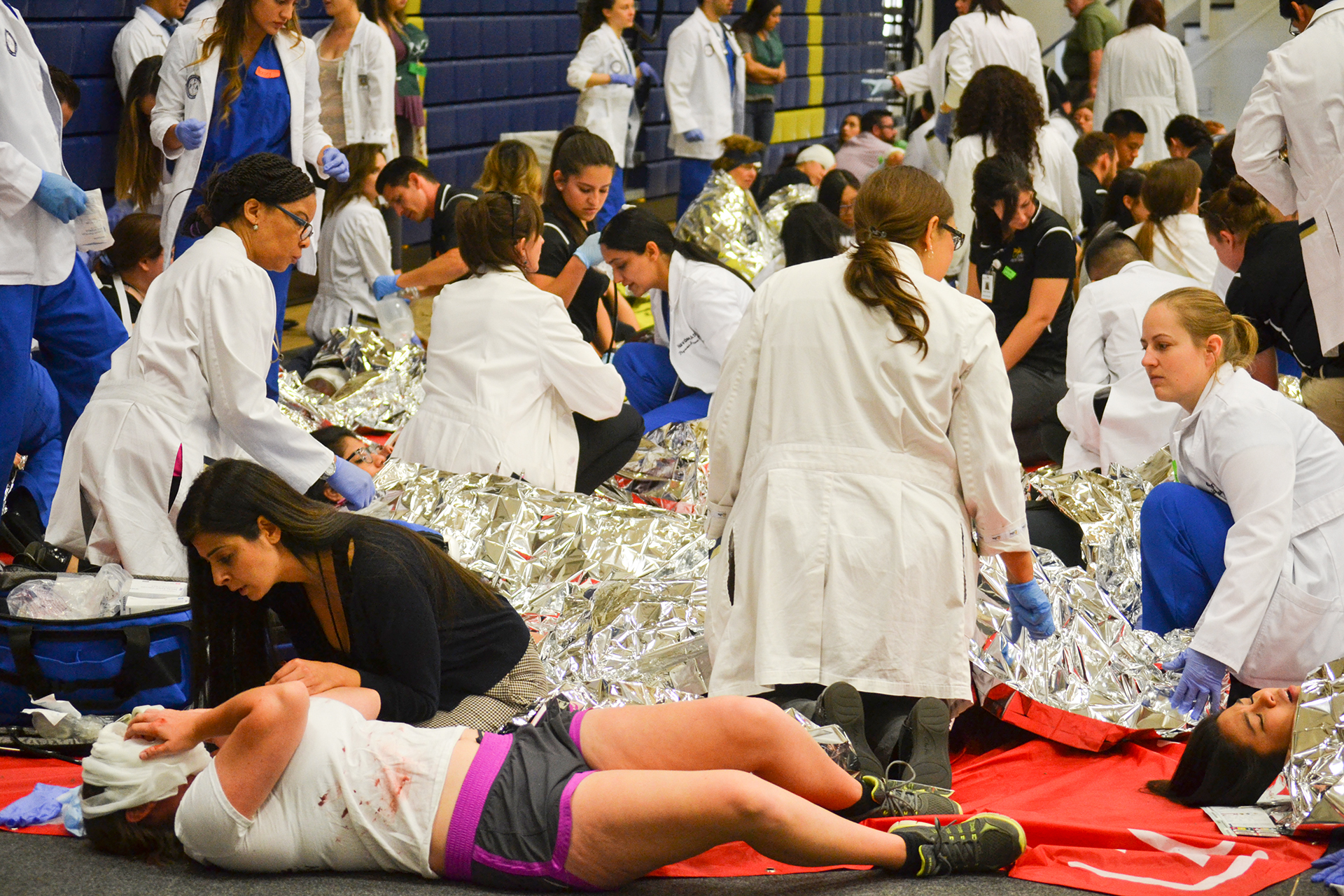 Cries and moans for help filled the Van Dyne Gym as the “injured” awaited assistance. Nearly 50 students, family members and friends were given simulated wounds, which were prepared by Sarah Pearce, assistant director of simulation at the College of Nursing, for the mass-casualty disaster simulation. Twelve faculty members at CBU, who have undergone IPE training, facilitated the event.

The event is the culmination of the first year for the IPE program at CBU, said Dr. Jolene Dickert, associate professor of athletic training. These students should be able to go out and work effectively with other health-care professionals, she added.

“The purpose of the simulation is to bring together [different health] professions to display teamwork, communication and understanding of roles and responsibilities of other healthcare professionals,” Dickert said.

Before the simulation took place, students were organized into teams. They then watched simulated news footage of a disaster. After the footage, the teams were then briefed on the disaster situation and then received instructions on how they could maximize care for the “victims.” The students then rushed into the gym to begin administering aid.

Morgan Goodson, a graduate student in physician assistant studies, said the IPE event helped to educate her on the various responsibilities of other health care workers.

“The event honed in on the point that during an emergency situation all hands on deck are needed and each player is as valuable as the next,” Goodson said. “Working as a team not only provides a dynamic patient care plan but also allows us as healthcare providers to have a valuable support system.”

“This simulation made things come to life. I learned things about myself… in something so intense,” Garduno said.

After the simulation, the teams turned their focus on planning and rebuilding the community. The students learned that their job is not finished once the disaster is over, Dickert said.

“It’s not just respond and then everybody leaves. What would each profession do [for] the community-rebuilding phase and what do their roles look like?” Dickert said. “At CBU, we teach our healthcare students with a whole person care philosophy. The well-being of their patients following a major event is something that should be important to them.”

The simulation prepares the students to be collaborative-practice ready, meaning they can work with other health-care practitioners, said Dr. Dayna Herrera, associate professor of nursing and CBU’s chair administrator of IPE. The IPE program was recently approved by the graduate curriculum committee and will be added as a requirement for many of the health profession programs at CBU.