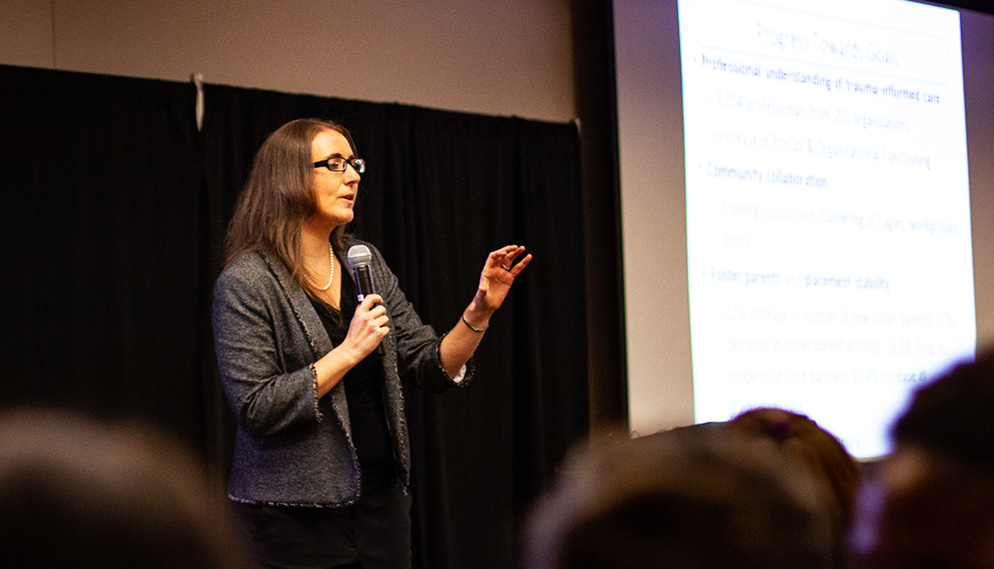 Riverside, Calif. (Sept. 21, 2018) — By calming a child in their environment, a caregiver can help them develop their voice in life, Dr. Mandy Howard told a California Baptist University audience on Sept. 20.

Howard was a speaker for the Culture and Justice Lecture Series sponsored by the College of Behavioral and Social Sciences at CBU. Howard, an assistant professor of psychology at Samford University in Homewood, Alabama, has spent the past 20 years researching mental health and quality of life issues for children in the foster care system.

Howard said as she began to do research initially in Texas, she found that foster kids are in the system on average for four years with seven different placements.

“Every time you move a child from one placement to the next you are severing a love relationship, a meaningful relationship,” Howard said.

In many of these moves, there was no transitional component built in for the children, Howard noted. In all of this, she added, the child’s voice is lost.

Howard argued that the system works better when there is a collective ownership in the way children are cared for and transitioned. She advocates for clinicians, state workers and psychologists all to form a collaborative team in the child’s care.

As a result of her research findings, Howard formed a training clinic that offers seminars to help inform and train different groups that care for foster children. She spoke about the ins-and-outs of starting such an endeavor.

Howard also started a summer camp to help with the development needs of foster children.

“During the course of our 3- to 5-week summer camp our goal was to facilitate attachment between the children and their camp counselors. This will then help them transfer that connection back to their caregivers when they got home,” Howard said.  “It was amazing to see the difference in the children after the camp.”