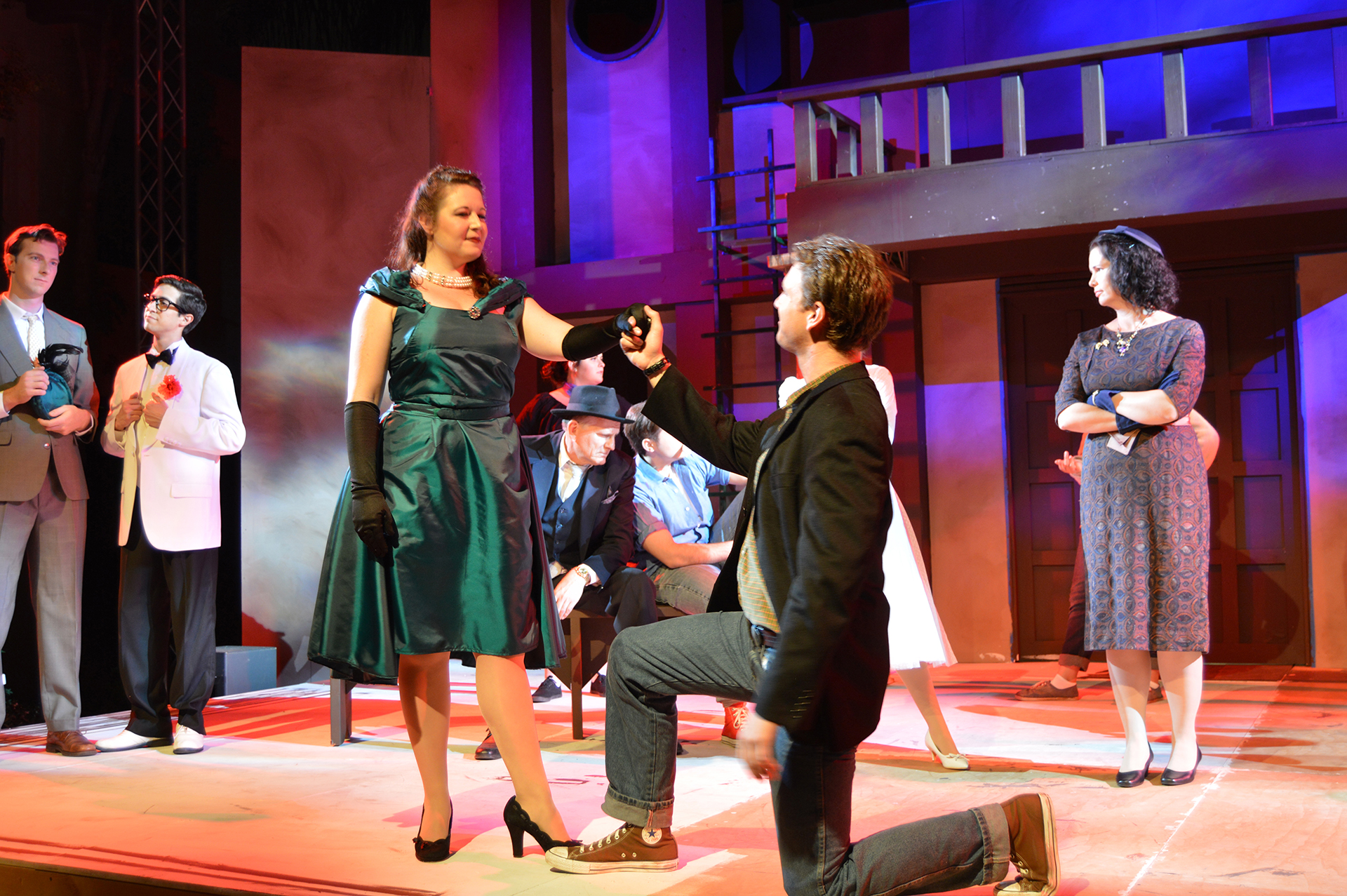 The “Taming of the Shrew” is one of two productions scheduled at California Baptist University’s Courtyard Shakespeare Festival during June. The play will have an updated setting—the 1950s.

Riverside, Calif. (May 30, 2017)—The Bard returns to the outdoor stage at California Baptist University in June for the second annual Courtyard Shakespeare Festival.

The festival is building on its successful inaugural season last year, said Frank Mihelich, assistant professor of theatre and director of “Taming of the Shrew” in this season’s schedule. In addition to offering more performances and more seats, the festival also will feature a high school Shakespeare day camp during its final week.

“For so many people to show up last year, that was a huge victory and it made us go, ‘Oh, there’s an audience,’” Mihelich said. “Because the casts are made of CBU [students], CBU alumni and then the wider theatre community, we get a lot of people in the courtyard that aren’t usually part of the CBU community.”

The festival will host in repertory “Julius Caesar” and “Taming of the Shrew.” The former is set in Rome during the historical time of 44 B.C.; the latter is set in a completely different era—1950s.

Garret Replogle, CBU theatre shop foreman, is directing “Julius Caesar.” He said actors have to be larger than life in outdoor theatre, and that brings to life a famous Shakespeare line: “All the world’s a stage.”

“In a dark theater, you rarely see the audience. In outdoor theatre, a lot of times the actors are wanting to connect with the audience,” Replogle said. “For the audience, instead of sitting back and watching something it feels like they’re actually a part of something.”

Maddison Rickard, a CBU theatre senior, plays Bianca in “Taming of the Shrew.” This is her first time performing Shakespeare.

“It’s a lot harder to memorize than anything else,” Rickard said. “With Shakespeare the text is so important and that’s been my biggest struggle—figuring out how to memorize the text and then not only memorize it but bring it to life.”

Mihelich is excited that the festival is growing. The event benefits the area and the actors, he said.

“If there’s a region and it has a theatre community, for that theatre community to be healthy there needs to be at least one organization serving the classics,” Mihelich said. “[The classics] demand every ounce of your talent, as a director and as a performer.”

“Taming of the Shrew”

The Courtyard Theatre opens at 7:30 p.m. Performances begin at 8 p.m.

Tickets or questions? Call the theatre box office at 951-343-4319 or email: mhyde@calbaptist.edu