College of Engineering Introduces Students To Fields of Study 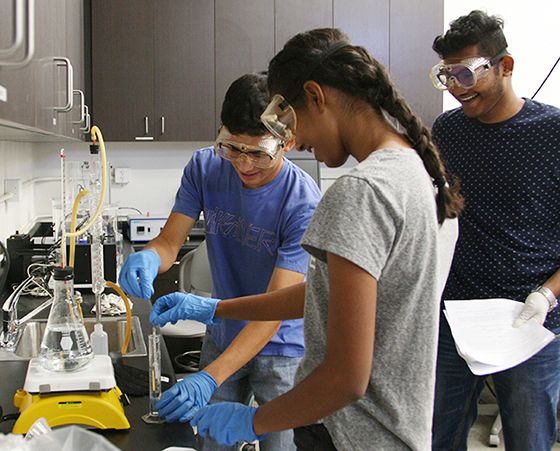 Wearing goggles and surrounded by lab equipment, the high school students measured fluids, checked temperatures and wrote notes as they learned about distillation. That is just one of the many things the students are experiencing during an introductory engineering course at California Baptist University.

The course covers several areas of engineering, including materials science, chemical, electrical, computer and civil. The program exposes the students to the various fields and what it is like to be an engineering student, said Dr. Mario Oyanader, associate professor of chemical engineering, who taught the course.

"The whole program is for high school students who would like to explore engineering as a college discipline and a future career," Oyanader said.

The course includes lectures and hands-on projects, such as designing and constructing a circuit to control a robotics car and building a bridge with uncooked spaghetti. The students also learn about ethics and teamwork.

"We give them that [teamwork] environment here because it's part of what they have to learn in engineering school," Oyanader said. With ethics, "they have to know engineering is not just numbers. It has to do with morals and your behavior."

Rana Eltahir, who will be a senior at Claremont High School, found electrical and mechanical engineering attract her the most. The program has confirmed her decision to pursue engineering.

"Every time we do a lecture, I'm very interested," she said. "When it comes to (engineering), I'm always engaged. Every day is something new and something different."