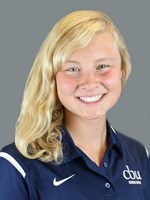 It is the first time a Lancer has swum the event under the 10-minute mark, as Halverson bested the program's previous record she held herself earlier this year (10:02.17) by more than 10 seconds. It was just off the Division II record of 9:50.49.

The victory also earns Halverson an All-American award, the second in her career as she earned honorable mention last year for her participation in the 800-year freestyle relay at last year's championships.

Halverson also becomes CBU's second-ever individual NCAA champion. Mary Hanson won the Lancers first NCAA title in the team's first year as a fully fledged member in 2014, taking the 100 back in a then D-II record time of 52.45.