RIVERSIDE (March 25, 2013)--California Baptist University partnered with the Fellowship of Christian Athletes Inland Empire for the inaugural Night of Champions March 23 in the Van Dyne Gym.

The event brought together Southern California teenagers, pastors, coaches, teachers and parents for a night of worship, games and speeches from three-time U.S. softball Olympic gold medalist Leah O'Brien and Ken Johnson, speaker and chaplain of the Indianapolis Colts of the National Football League.

O'Brien spoke to audience members on the importance of using the God-given passions of their lives.

"I've got some talent," O'Brien said of her years playing softball. "But I'm going to tell you that it was a whole lot of other things that got me to those (Olympic) podiums. It was the passion that God had placed inside of me for the sport to be my very best as I was out there and to give everything that I had (during the game)."

Johnson took to the stage with a message of becoming an inspiring athlete by "not getting stuck on stupid."

"Our athletic department's mission is to honor Christ through excellence in athletics, and we are excited to partner with the Fellowship of Christian Athletes on this exciting event," said Dr. Micah Parker, CBU director of athletics. "Our goal is to reach as many junior high and high school students with the Gospel through this evening." 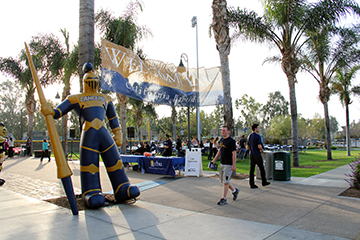 CBU partnered with the Fellowship of Christian Athletes to welcome middle school and high school students to the inaugural Night of Champions March 23.