Riverside, Calif. (Sept. 21, 2015) – Change came this summer to California Baptist University's College of Health Science. The college, formerly known as "Allied Health," now has a new home to go along with the new name.

The college has relocated to the former Riverside Christian Schools campus on Monroe Street across from the Lancers Outdoor Athletic Complex. 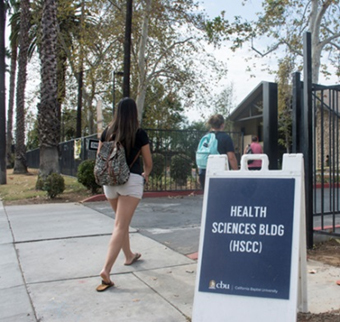 "We're completely blessed to get all the space that's over here," said Dr. David Pearson, interim dean of the College of Health Science. "I look forward to what we can do with it."

Previously, the college was spread out throughout the main campus, with faculty in Lancer Arms and parts of the James Building. More than a 1,000 students are enrolled in programs offered by the College of Health Science.

Pearson said the biggest benefit for both faculty and students would be the opportunities for collaboration by being together in neighboring buildings.

"No matter what aspect of health science we are a part of, we all have the common goal of making people healthier," he said. "That's a lot easier to do when you have good proximity to one another."

CBU purchased the property in June 2013 and Riverside Christian Schools leased most of the buildings back until this summer. Demolition and remodeling began in June and faculty started moving in Aug. 20. Walls were removed and rebuilt; exterior and interior walls were painted; carpet laid and audiovisual equipment along with furniture was installed.

A significant investment in new classrooms, laboratories and office space is transforming the campus into a modern, state-of-the-art learning center for health sciences.

"I think that every time we've built new facilities, smooth campus integration has always been the goal, and I think that's been the end result," Pearson said.

In August, the College of Allied Health became the College of Health Science. The new name more accurately reflects the scope of programs offered by the college, Pearson said. By definition, allied health professions are ones such as athletic training, communication disorders and physical therapy, he explained.

Pearson said a preschool remains on part of the property that Riverside Christian Schools continues to lease. Eventually, he expects that facility will be repurposed as clinics for athletic training and communication disorders so students in those fields can get their clinical hours.

"We are still a central part of the Great Commission and doing what everybody else does on campus. It's just new space," he said.