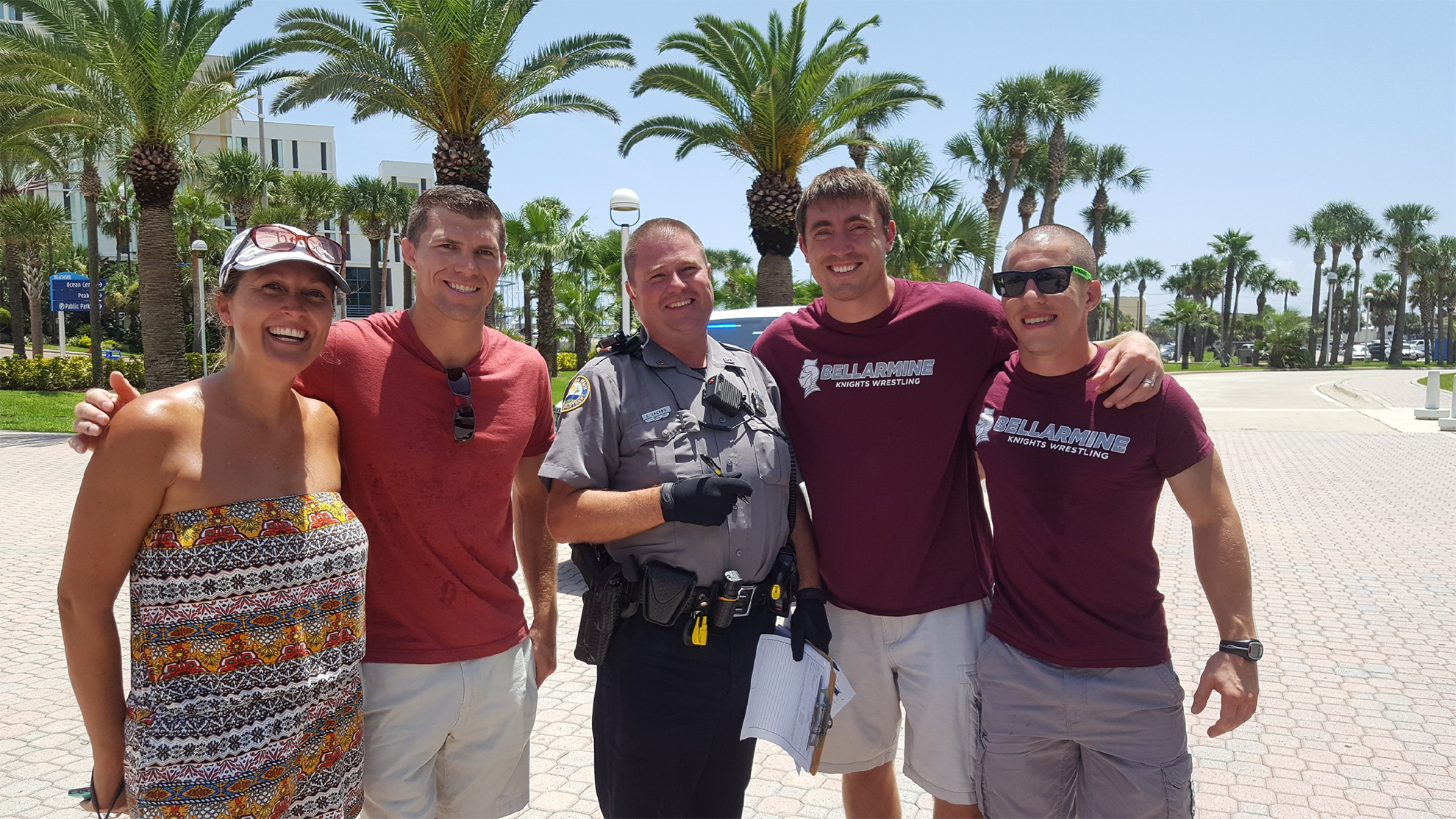 Derek Moore (second to left), assistant wrestling coach at California Baptist University, takes a photo with fellow wrestling coaches Brandon Sellers and Spencer Adams from Bellarmine University, who teamed up to take down a thief who had stolen vacationer Jill Thompson’s wallet.

Riverside, Calif. (Aug. 10, 2017) – California Baptist University assistant wrestling coach Derek Moore was in the right place at the right time when his instincts compelled him to do the “right thing” and help block a robbery attempt.

Moore was attending the National Wrestling Coaches Association's annual convention in Daytona, Florida with the Lancers wrestling coaching staff Aug. 4-6. On the last day of the conference, Moore heard a cry for help.

Jill Thompson, a Florida vacationer, had her wallet seized from behind by a man who then made a mad-dash get away. Thompson followed in pursuit, all the while screaming that her wallet had been stolen.

Moore, along with two wrestling coaches from Bellarmine University (Kentucky), Brandon Sellers and Spencer Adams, were nearby in a hotel parking lot when they heard Thompson's cries for help. The three men immediately responded to the situation.

Moore was the first to catch up and subdue the thief. The two other coaches soon arrived on the scene and helped hold the alleged thief. A fourth man assisted the coaches, pinning the suspect to the ground until police arrived.

“Derek's response was immediate and very brave,” Thompson related in an email to CBU. “I could tell he truly cared about my well-being and safety and was concerned about me. To me, he was the hands and feet of Jesus and a real-life superhero.”

“Everything happened so quickly,” Moore said, recalling the incident. “In Jill’s voice, I could hear a genuine cry for help and I wanted to do what I could to help her. I believe my instinct to chase down the thief comes from a combination of my upbringing and faith, both encouraging me to what is right and help others.”

Police indicated that the suspected thief was on probation for assault and battery, Thompson said.