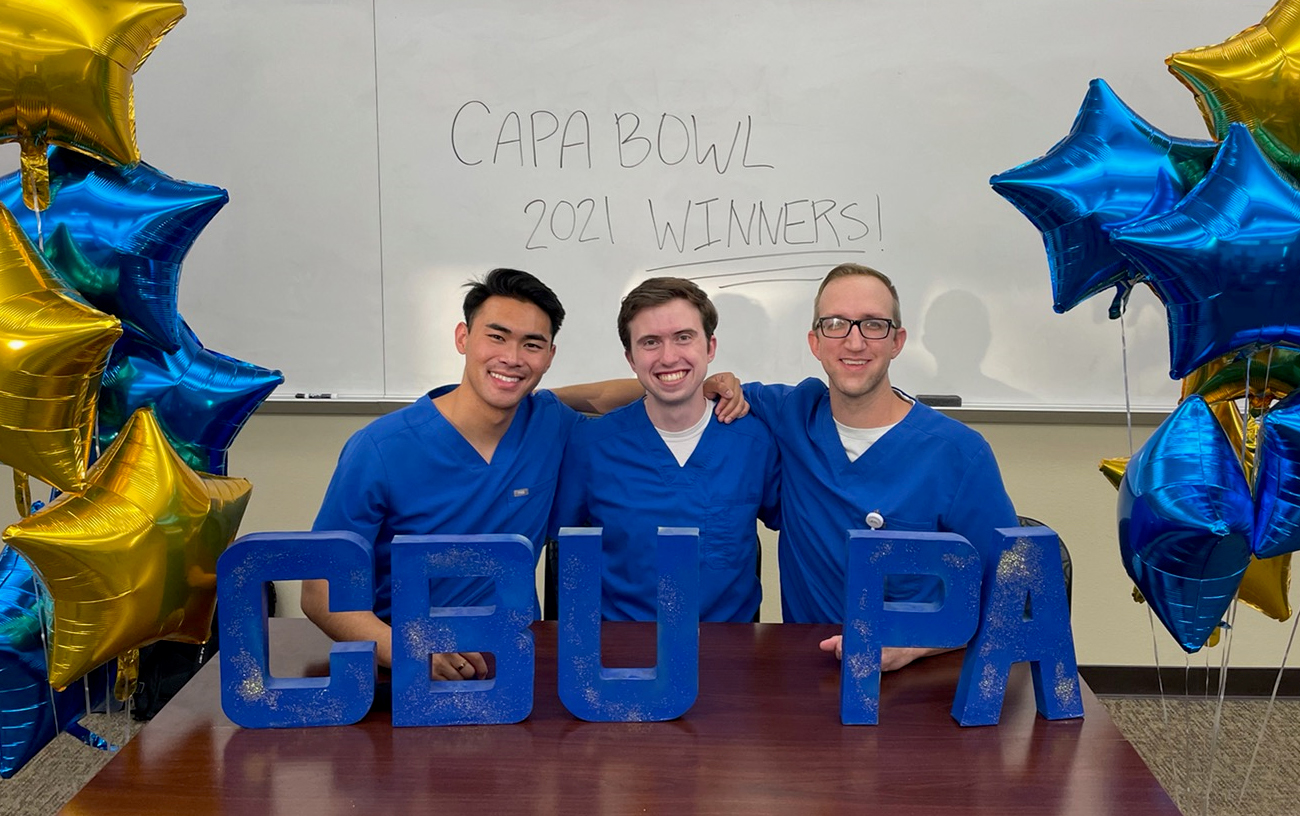 Riverside, Calif. (Oct. 13, 2021) – Students in the physician assistant studies graduate program at California Baptist University were faced with this question: A 4-year-old boy is diagnosed with viral rhinitis. What is the most common cause of viral rhinitis?

That was the final question the team of CBU students answered to win the California Academy of Physician Assistants (CAPA) Student Challenge Bowl on Oct. 9. (The answer: rhinovirus.)

This is the fourth time in five years that CBU students won the event.

Students in CBU’s physician assistant studies graduate program made up one of 12 teams competing in the CAPA bowl. In the final round, CBU faced Chapman University and Loma Linda University and came out on top.

“This win continues the exciting recognition for CBU and our PA program,” said Mary Ann Stahovich, assistant professor of physician assistant studies. “This award is all the more remarkable since students learned these concepts in the midst of the pandemic last year. Their win speaks to both the program’s deep determination to optimize student education coupled with the student’s keen abilities and perseverance.”

The event took place virtually again this year. The teams had to wait for the entire question to be read and then buzz in fast enough to answer it first. Teams scored 100 points for each correct answer and lost 100 for each incorrect one.

Neil Soriano, Philip Pytak and Ryan Van Liew made up the CBU team. Last month each was in a different clinical rotation. With each studying for their respective end-of-rotation exam, they took a divide and conquer strategy preparing for the event.

“I learned that I still have so much to learn! I also learned that my professors weren’t kidding when they would stress an important topic throughout our didactic year—‘You’ll want to remember this.’ They were definitely right about many topics we encountered,” Van Liew said.

“Even though I held myself responsible for knowing as much content as I could, I learned to recognize my own limitations and have faith in my teammates,” Pytak said. “I can’t and won’t always know everything, but I can rely on others just as much as I can help them in order to achieve something greater than any of us alone.”

Soriano said a big challenge during the event was the buzzer.

“Making sure to avoid buzzing in early at the risk of getting penalized while still trying to buzz in before the other team was an added layer of stress,” Soriano said.

Van Liew said another challenge was the ambiguity in some of the questions.

“We couldn’t always be sure of which answer they might be looking for. For this reason, we chose not to answer several questions to avoid penalty,” Van Liew said.

With CBU’s record in the CAPA bowl, the team members said their main goal was not to be eliminated in the first round.

“We felt immense pressure. We wanted to avoid disappointing our program and our cohort,” Soriano said. “After passing the first round, we were all relieved that we accomplished our goal. Winning was icing on the cake!”

“I am grateful for the trust and support of our professors and classmates,” Pytak said. “They had more confidence in us than we may have had in ourselves. I remember watching CBU’s team last year and being impressed with their extensive knowledge, so it feels surreal to now be part of the winning team this year.”