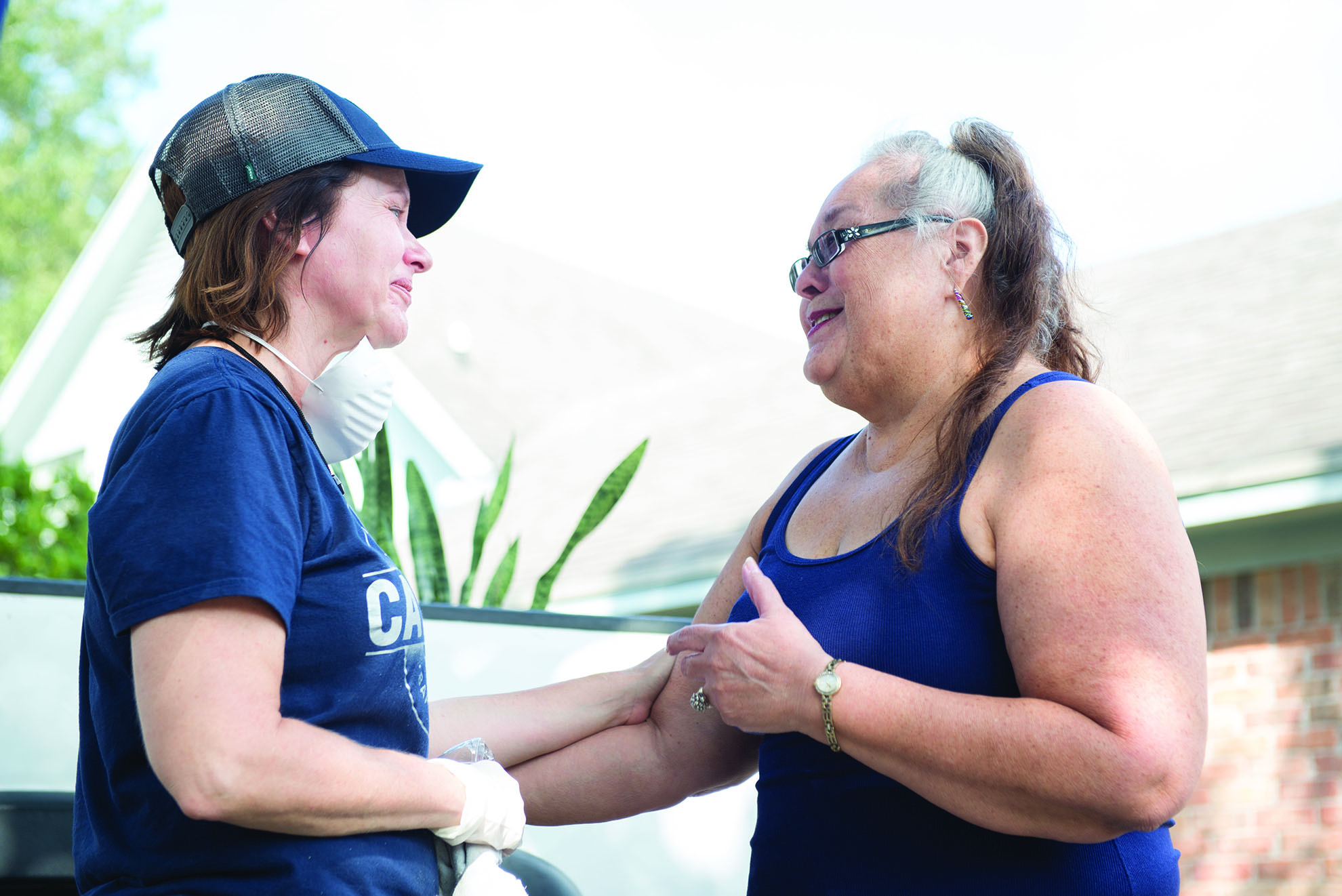 (Left) Beverly Querin, secretary in the Office of Leadership and Transitions, talks with a homeowner whose house was damaged in Hurricane Harvey.

Riverside, Calif. (Oct. 23, 2017) – Austin Romito, a sophomore at California Baptist University, eagerly signed up to serve on a Hurricane Harvey relief team that the university had organized. Romito started the trip attentive to the service tasks students were assigned to perform. However, shortly into his service trip and after watching a homeowner’s reaction to observing the wreckage for the first time, he realized the trip was bigger than just tasks—it was about helping people rebuild their lives.

Harvey hit southeast Texas Aug. 25, and over the course of several days, the storm brought a record rainfall to the area that resulted in catastrophic flooding and damage to thousands of homes. CBU sent a team comprising more than 40 faculty, staff and students to Houston, Texas, on Oct. 12-15 to help with the cleanup efforts.

The CBU group worked with Send Relief, a branch of the Southern Baptist Convention’s North American Mission Board (NAMB). Team members spent two days helping with cleanup tasks such as the removal of drywall and debris in addition to sanitizing efforts, said Julie Dobbins, director of Compassion and Women's Ministries.

“Compassion Ministries through Spiritual Life exists to put our faith into action, and so we want to be able to serve and share Christ with those in need. It is a perfect opportunity to work with NAMB in this capacity,” Dobbins said.

John Montgomery, dean of Spiritual Life, recalled meetings he had with NAMB about collegiate ministry opportunities. The desire of college students to help with disaster relief was often blocked by the hurdles of training and certification, and NAMB helped remove those obstacles, Montgomery said. When Harvey hit, NAMB contacted CBU about an opportunity for students to go to Houston. Compassion Ministries organized the Houston trip in less than a month.

The CBU volunteers removed drywall, flooring, cabinets and furniture—anything that had developed mold. Those items, along with other damaged goods, were piled up on the front lawn for city workers to collect for disposal.

Jacob Campbell, a marketing junior, said the trip brought to life the devastation of the Hurricane Harvey.

“It was unreal demolishing someone’s home,” Campbell said. “It wasn't until the homeowner came in to see her home for the first time in over a month that I was really hit with the realness of what has happened. Although it was a sad moment, it was an opportunity to serve her because we know she would not have been able to do all that work by herself.”

Dr. Jacob Lanphere, associate professor of environmental science, was a team leader for the CBU volunteers. Lanphere said the project was an opportunity for students to grow in their faith.

“The teams that go on these trips grow in their walk with the Lord and grow stronger in their faith as they exercise their faith while serving others,” Lanphere said.