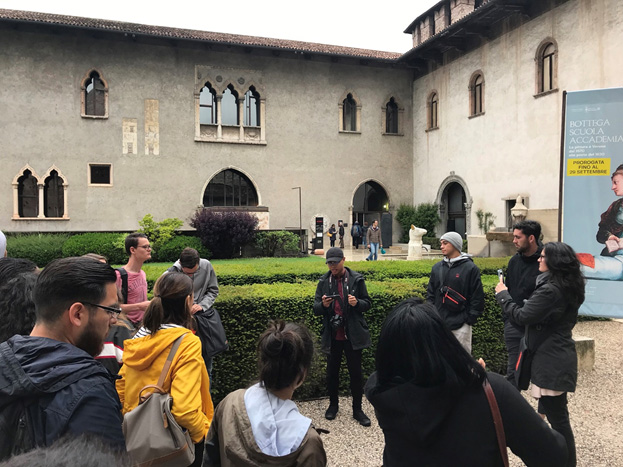 Riverside, Calif. (July 2, 2019) – Rebekah Bottjen, a California Baptist University student, was amazed as she walked through the gardens at Villa d'Este and Hadrian’s Villa, both in Italy. She greatly admired all the historic architecture.

“The Hadrian’s Villa is actually ancient Roman ruins, so it felt like I was being transported through time as I was wandering through it,” Bottjen said.

Bottjen was one of nearly 20 Master of Architecture students from CBU who spent five weeks in Italy, visiting and studying a spectrum of architecture through many eras. The trip was coordinated by the College of Architecture, Visual Arts and Design (CAVAD).

“After experiencing everything, I realized that the history of the world abroad has such an amazing impact on our world today,” Bottjen said. “Architecture brings people together in a way we wouldn't normally realize and the history of Italy shows it well.”

Keelan Kaiser, program director of architecture; Dr. Katherine Papineau, assistant dean in CAVAD; and Dr. David Ogoli, professor of architecture, led the group of students. The team, left for Italy on May 8, and began their tour in Florence, studying medieval and Renaissance art, culture and architecture. The team also traveled to Venice, Vicenza, Verona and ended in Rome, exploring architectural works from the antiquity and Baroque as well as contemporary periods.

“Since the beginning of recorded history, architects have traveled to heritage sites to study and draw the monuments to better understand their craft and how buildings endure. Our students embraced this rite of passage on the ultimate field trip,” Kaiser said.

Along with taking photos, videos and writing blogs, the schedule included 41 drawing sessions.

“That’s really important because sitting still for half an hour and drawing all the details of any particular façade from a Renaissance masterpiece is an educational experience in and of itself,” Kaiser said.