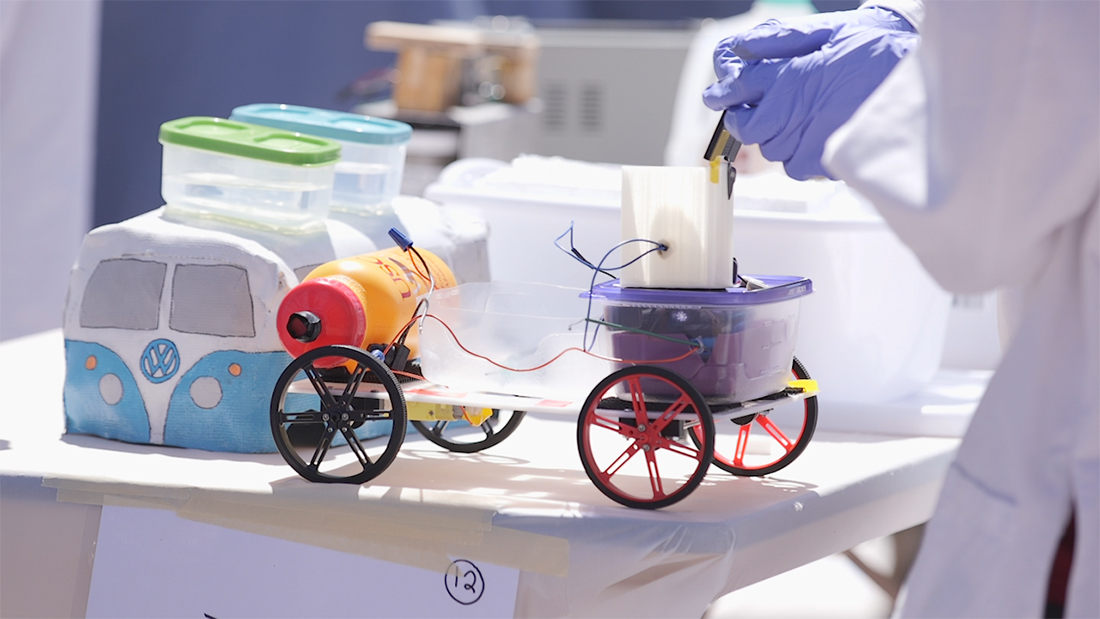 Riverside, Calif. (Nov. 30, 2018) – After more than a year of designing, planning, testing and building a Chem-E-Car, students from California Baptist University finally had a chance to show off the final version of their “VW Bus.”

Chemical engineering students competed in the international Chem-E-Car competition in Pittsburg on Oct. 28. The CBU team finished 16th overall out of 39 teams, 11th among U.S. teams, and first from the West Coast region.

“Competing was a big deal to me personally—it was the culmination of nearly a year and a half of working on the design, manufacture and testing of the car,” said James Suzuki, a senior. “I thought it was amazing to represent the school and my team against the top teams worldwide.”

In April, the CBU team from the American Institute of Chemical Engineering (AIChE) club finished third at the Chemical AIChE Western Regional Conference, paving their way to the international competition. Students Suzuki, Sarah Hrovat, Luis Rodriguez, Kristine Sellona and Edward Mikenas made up the team. This time they finished ahead of the University of California, Berkeley and California State Polytechnic University, Pomona—the two teams that placed ahead of CBU at the regionals.

The competition challenges students to build a self-powered, shoebox-sized vehicle that is programmed travel a specified distance within two minutes, typically 15 to 30 meters, while carrying an assigned load and then stop on its own. The car that ends up closest to the designated finish line wins the competition.

For the Pittsburg competition, the team upgraded the car body from scrap wood and aluminum to acrylic plastic. Additionally, two new motors were implemented and tweaks were made to the original custom electronic circuitry.

“I was impressed with our performance, but there is still motivation to improve our consistency even more next year,” Suzuki said. “I feel like our platform is solid, and the next car shouldn't need to have too many radical changes to its core functionality.”

Dr. Sarah Zhao, assistant professor of chemical engineering and the AIChE club advisor, said she was proud of the results the students achieved.

“This is a great opportunity to showcase CBU’s chemical engineering program,” Zhao said. “Even though we are a small program, we were not the underdog at the competition. This has made our students confident about their education at CBU.”