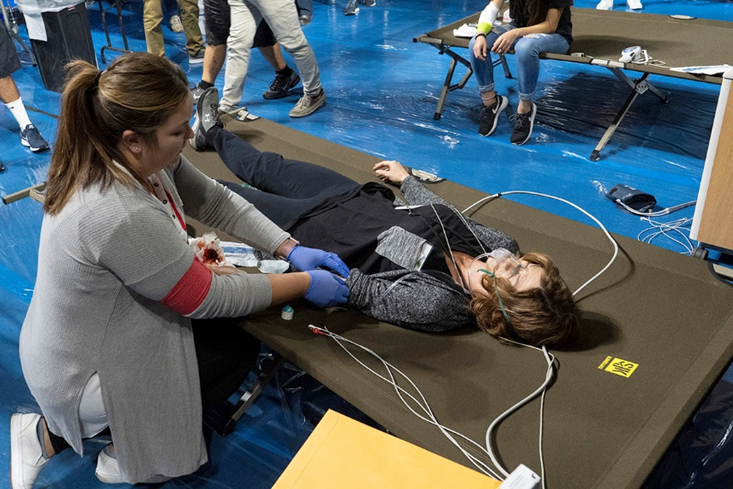 Riverside, Calif. (April 15, 2019) – The scene was chaotic even for a simulated disaster. “Victims” cried and moaned for help, trying to be heard over the thumping background noise of helicopter sounds.  Graduate students from health care programs at California Baptist University scrambled to their aid, seeking to restore calmness and stability to the frenzied environment.

Some 160 graduate students participated in an interprofessional education (IPE) disaster simulation on April 13 at the CBU Events Center. Nearly 25 CBU faculty member facilitated the event. Another 150 or so CBU students, family members and friends volunteered as victims.

Adrian Williams, a counseling psychology student, said that after participating in the simulation, he feels more confident in responding to a potential crisis.

“At one point I was assisting with moving someone on the spine board, even though that was not in my scope of practice as a marriage and family therapist. I learned I can still assist in other ways,” Williams said.

Dr. Dayna Herrera, department chair of the Learning Resource Center and IPE, said the event was the culmination of the interprofessional instruction students receive throughout the year.

“The purpose and definition of interprofessional education is to bring students from various healthcare disciplines together to learn from, with and about each other in order to improve healthcare outcomes,” Herrera said.

Before the simulation took place, students were organized into interprofessional teams. They viewed simulated news footage of the disaster and were briefed on the situation. They also received instructions on how to maximize care for the victims.

“Disorganization leads to poor patient outcomes. You need to have someone who can be in that role and be able to delegate responsibility efficiently and effectively,” Edens said. “I want to make sure my knowledge and skills are where they need to be in case a situation like this were to arise. If you fail to prepare, then you are prepared to fail.”