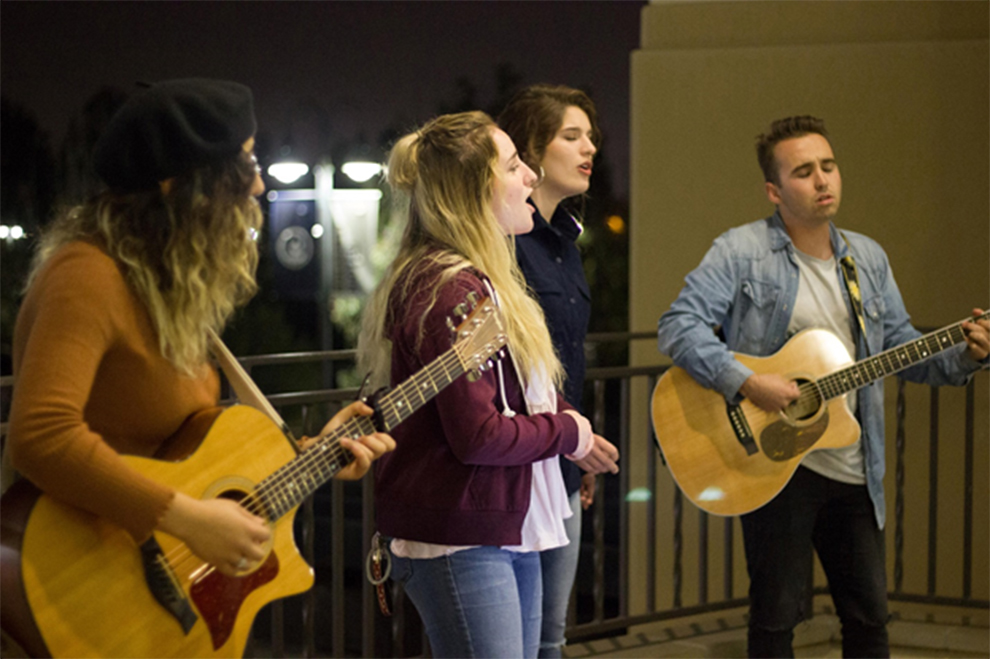 Students at California Baptist University lead worship at the end of the 24-hour Freedom Fast on Nov. 6. The International Justice Mission club at CBU held the fast in an effort to bring awareness to the ills of modern-day slave trading.

The event began at 7 p.m. on Nov. 5 with a time of prayer for individuals affected by slave trading around the world. The fast ended at 7 p.m. the following day with a potluck meal and a time of worship. During the intervening 24 hours, the participants of the fast also raised funds that will be donated to the global organization of International Justice Mission that seeks to rescues people living in slavery.

“The deprivation of food—that we take for granted—gives us a picture of how one in slavery might feel,” said Alyssa Reimer, a photography senior and president of the International Justice Mission club.

Cambria Osborn, a nursing freshman, said when she started to feel hungry during the 24 hours fast, she resisted the urges by remembering the slave victims and praying for them.

“Everyone should be aware that this is evil and that it is happening everywhere,” Osborn said. “A lot of times we think that slavery is something of the past. But when we open our eyes and stop being so naïve to everything, I believe that’s when change can happen.”

Danae Erber, a history and international studies sophomore and a club leader, said information on what regions to pray for was handed out at the start of the fast.

“Because we had those prayer points, I was able to pinpoint who and the kind of people I was praying for. God knows but it just gives me peace of mind that I am doing my part,” Erber said. “I also learned that I can go without food for 24 hours and learn more about God and grow a relationship with Him.”

Jamall Bradshaw, a criminal justice junior, got a henna tattoo with an intricate design on his hand as a way to spark conversations about slave trading.

“I think it is something college students should have in the back of their minds, especially in times where we say times are rough and hard here in America,” Bradshaw said. “We should remember in another country there is a man, woman or child who is going through something so much worse. So, I think it really causes us to take a step back and be humble and see the privileges we do have in America.”