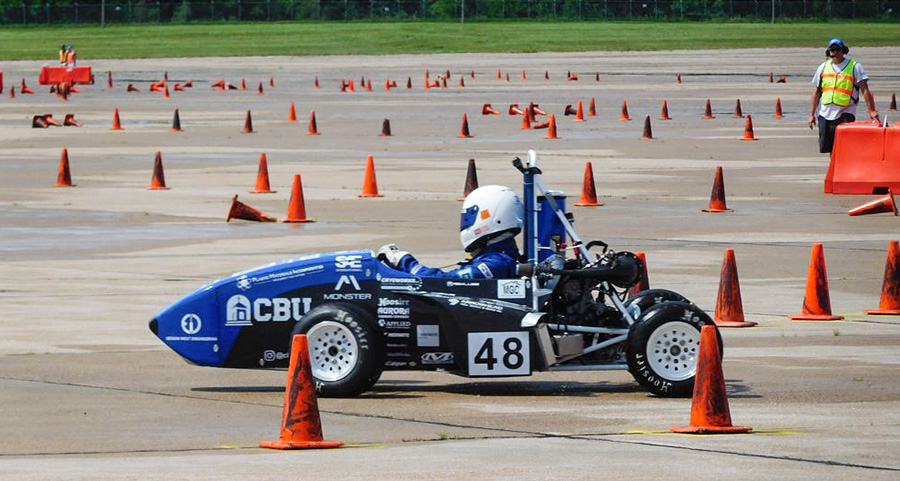 Riverside, Calif. (July 24, 2019) – A team of 10 aspiring engineers from California Baptist University put their Formula car to the test at the Society of Automotive Engineers (SAE) International Competition held in Lincoln, Nebraska, in June.

The CBU crew finished 31st in the internal combustion class preliminary results. Additionally, the car finished the endurance event for the first time, which requires a vehicle to travel 15 laps around a track for an overall distance of approximately 14 miles.

Josh Bigley, a mechanical engineering junior at CBU, was one of the four drivers.

The team competed against 76 other entries. The competition included presentations on cost and design as well as dynamic events such as acceleration and autocross.

Bigley was also the design lead for the car’s chassis and electronics sections.

“Working on electronics taught me to be extremely careful and thorough. It really showed me the importance of doing something right the first time,” Bigley said.

Katie Mast, a mechanical engineering junior, has been part of the SAE student club at CBU since her freshman year.  This past year, she was the ergonomics lead, which included designing the steering, brakes, head rest, seat and gear shifter.

“The learning curve I went through for this year was crazy,” Mast said. “Working on the car, you learn so much. Learning about bolts and what’s needed and learning to make things in a way that’s easy to build. You don’t learn that in class, you learn that by doing.”

“We placed above some teams that have been around 10, 15 years and this is our third car,” Mast said. “That makes me really excited to see where it’s going to go. If we’re here now, where can we go from this?”

“This was an exceptional educational experience for the CBU students who competed and learned from experts in the automotive industry while sharing their experiences with other teams,” Clark said. “Additionally, the design judges complimented the CBU students on their respectfulness, character and excellent teamwork skills.”