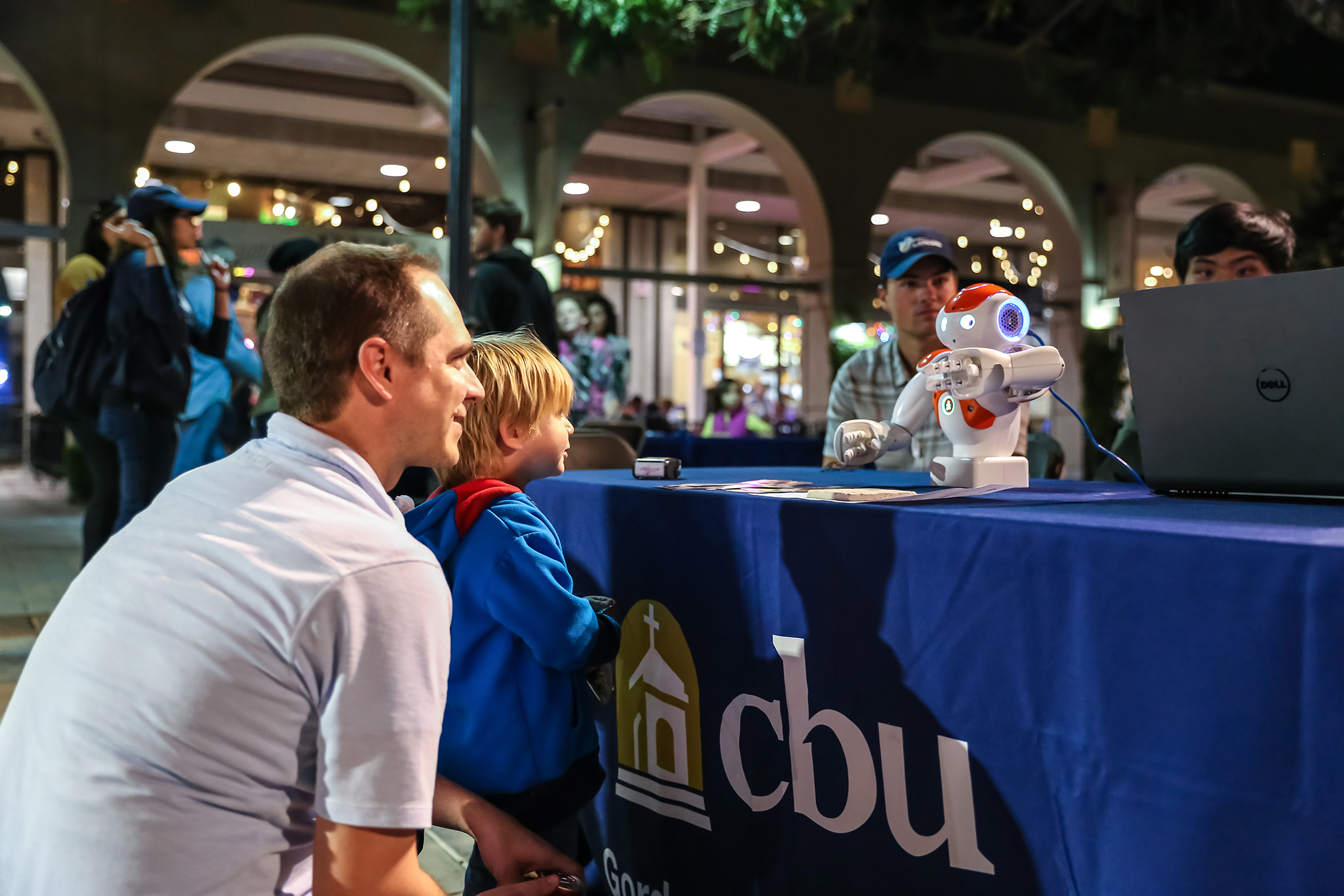 A NAO humanoid robot, programmed by California Baptist University engineering students, busts some moves for event-goers at the Long Night of Arts & Innovation in downtown Riverside on Oct. 12.

Riverside, Calif. (Oct. 13, 2017) — The biennial Long Night of Arts & Innovation event made its way back to downtown Riverside on Oct. 12, and California Baptist University students and faculty were well represented. 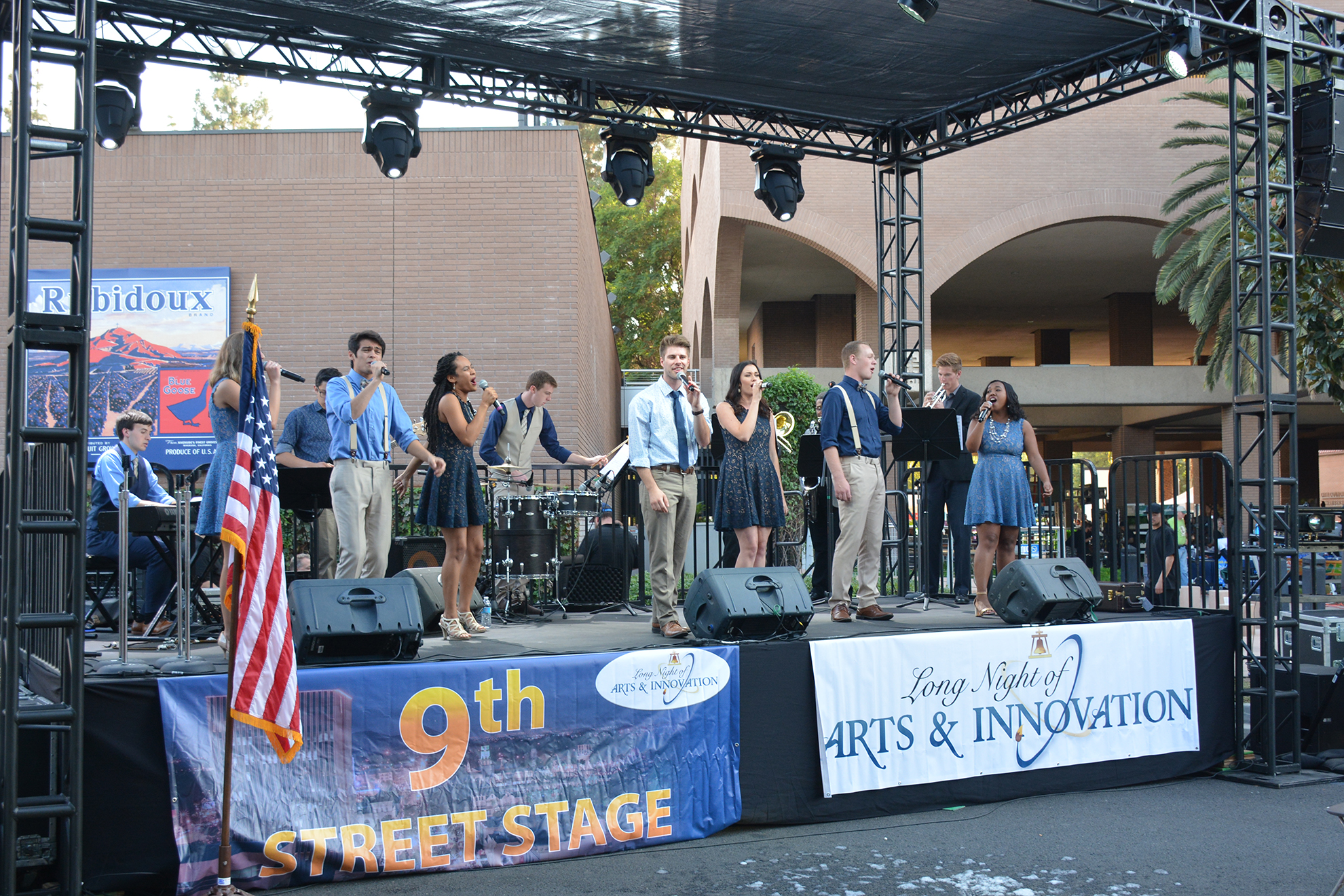 At the opening reception on the main stage, the Shelby and Ferne Collinsworth School of Music’s HOPE group performed a variety of music.

On Main Street, near the CBU Gallery, CBU had multiple interactive booths, displaying a wide range of creativity in the different academic settings. For instance, engineering students held a demonstration of a five-fingered, remote-controlled robotic hand. 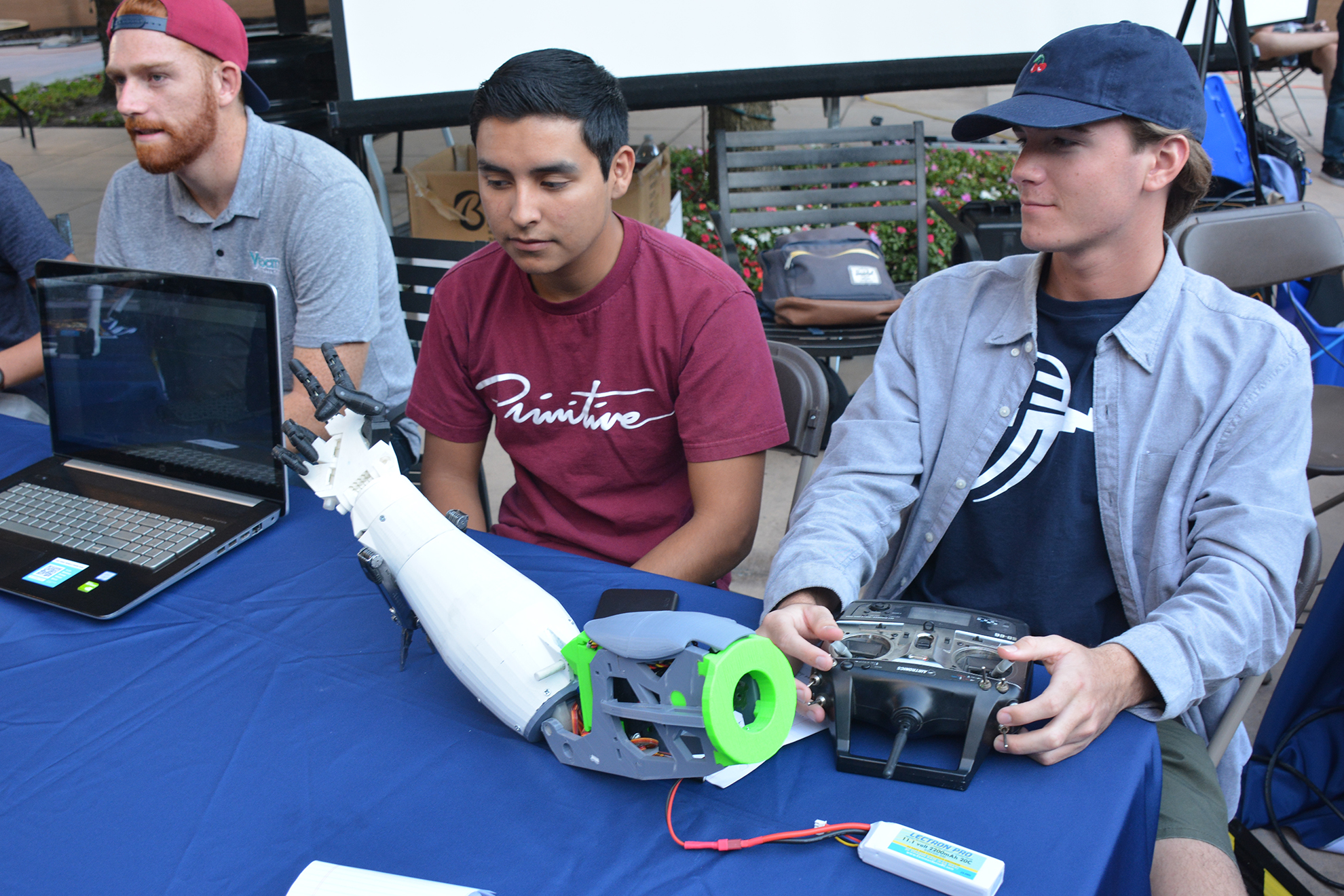 Adam Calderon, an electrical and computer engineering freshman, instructed passer-byers of how a 3-D printing machine at CBU created the exterior of the robotic hand and how the wiring was constructed by students throughout the robot.

“As a freshman, it’s really neat that I get to have this type of hands-on interaction with this technology,” Calderon said. 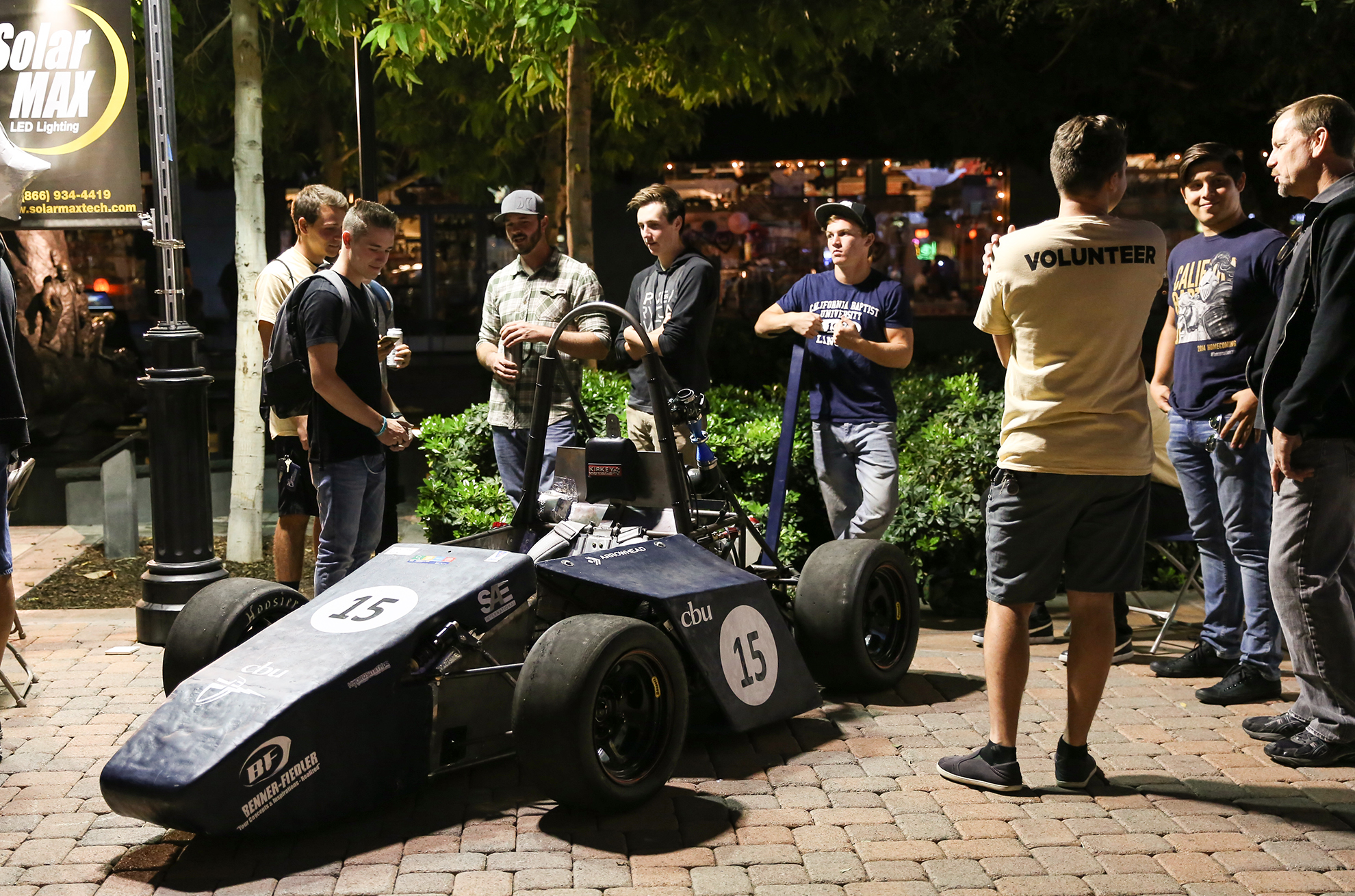 The Gordon and Jill Bourns College of Engineering at CBU also displayed its SAE Formula Vehicle. Event-goers stopped to chat about the vehicle and also had an opportunity to get in and get a feel for the small racing car.

“The vehicle was created from the ground up,” Chicas said. “What was accomplished with this car in one year was pretty amazing. I’m looking forward to what we can accomplish this year to improve the car.” 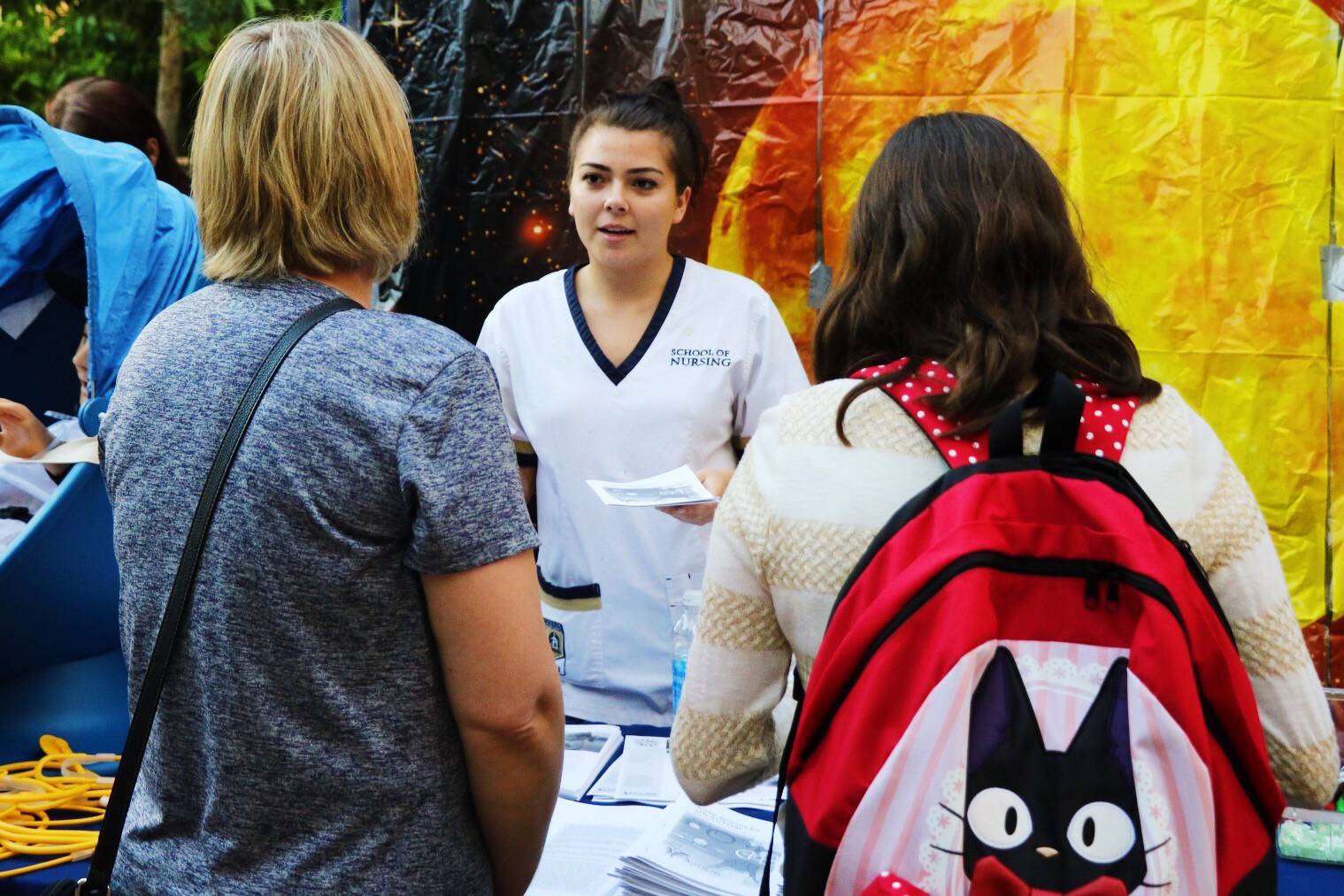 The College of Nursing at CBU had an autism awareness display at the event. The indie film “Voyage of the Gamelan,” created by nursing faculty and students, was shown on a loop throughout the evening. The film looks at life from the lens of a person with autism.

Sarah Pearce, assistant director of the nursing learning resource center at CBU, said the video helps students get a visual representation of what an autism person faces daily.

“The film takes you inside the brain of a boy of autism,” Pearce said. “The film is meant to help bring about compassion and understanding for potential patients students might help.”

CBU faculty also presented lectures and demonstrations throughout the evening on a variety of topics related to their academic strengths.